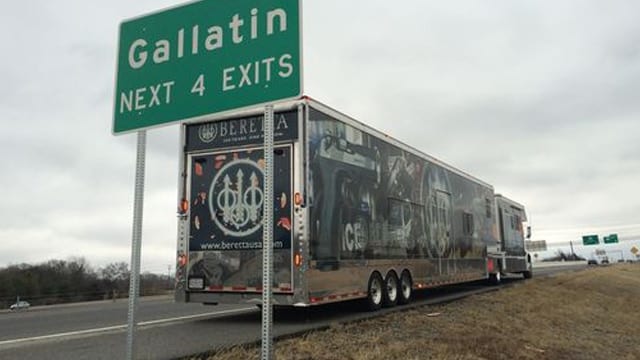 In a totally unstaged picture, a Beretta truck sits behind a sign for Gallatin, Tennessee.

Beretta USA will enter a new chapter this week in its nearly 500-year history by officially opening its facility in Gallatin, Tennessee.

“Beretta U.S.A.’s new Gallatin campus is the most recent step in our company’s development as an important research and development and manufacturing operation, not just for the U.S. market but for our customers around the world,” said Dott Franco Gussalli Beretta, the company’s executive vice president of Beretta, in a statement.

After Friday, all manufacturing operations will be performed at the Gallatin facility while the Accokeek, Maryland, will maintain administrative and executive offices.

Last week, the company made the last batch of M9s ever to be produced for the military in the Accokeek facility and shifted production to Gallatin. The M9 contract is one of Beretta’s most coveted achievements. The company has been supplying the sidearm since 1985 and been producing them in Maryland since 1987.

Since 2014, the company has been developing the 156,000 square foot facility and shifting manufacturing from its plant in Accokeek, which has housed U.S. operations since 1977.

With help from county and state government, Beretta will invest an estimated $45 million in the building project and add 200 jobs to the area. The company decided to move after Maryland lawmakers passed strict gun control laws, the Firearms Safety Act of 2013, that prohibited guns deemed assault weapons and magazines that can hold more than 10 rounds.