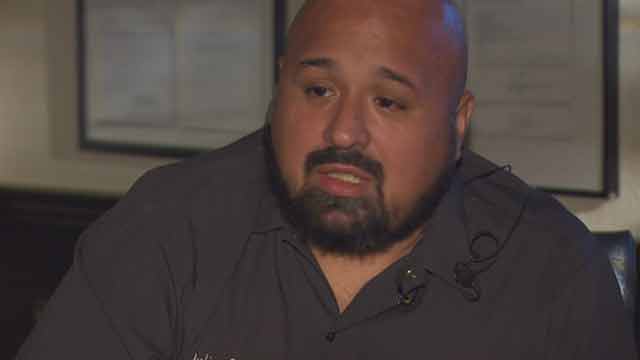 Julian Carmona said the last thing he wanted was for his two young children to see him arrested. (Photo: KHOU)

A man was arrested outside of a Houston convenience store earlier this month, accused of twice pointing a gun at an off-duty police officer, but now, recently released surveillance video raises questions about the officer’s account of what transpired.

On the night of April 1, Julian Carmona stopped at the gas station and quickly pulled his truck behind Houston Police Officer William Wright, who was in uniform, but off-duty and driving his personal vehicle at the time. Carmona admitted to entering the parking lot in haste, but said it was simply because he was in a hurry to get to the restroom.

But as Carmona, who has a valid concealed handgun license, got out of his truck, he accidentally dropped his handgun, which fell to the ground.

“I don’t know if I hit it when I opened the door, or hit it with my foot – everything just happened so fast,” Carmona told KHOU in an interview.

Carmona retrieved the gun to put it back in place, but by that time, Wright already had his service pistol drawn and trained on Carmona, who immediately placed his hands in the air.

“I put my hands up like, ‘Sir,’ I apologized right away,” Carmona said.

At one point, Carmona started to reach toward his pocket to retrieve his concealed carry license for Wright, but quickly put his hands back up in the air.

Minutes later, as Carmona’s two children sat in his truck watching, the father was placed in handcuffs, arrested and charged with aggravated assault with a deadly weapon, which is a felony.

Wright claimed Carmona came out of his truck holding the handgun and pointed it directly at him. He also said Carmona dropped the gun, reached down, picked it up and aimed it at him for a second time.

But Carmona said he never pointed the gun at the officer. In fact, he pleaded with Wright that night to review the surveillance video. And while it’s unknown if Wright actually did look at the video, its recent release tells a different story from the officer’s account. Jed Silverman, Carmona’s attorney, said the officer’s story and what the video shows are “night and day.”

“But for this video, my client could be one of those that’s sitting in prison and is taken away from their family, based on what appears to be a false allegation,” Silverman said.

But the video also captured something else which may land the officer in hot water. Apparently, moments before the incident with Carmona, Wright was inside the gas station purchasing beer. While Wright was off-duty, it is against policy to purchase alcohol while still in uniform, which he was.

And apparently this wasn’t Carmona’s first brush with the law either. He was slapped with a felony drug charge in 2007, and while a felony would normally have disqualified him from obtaining a concealed carry license, Silverman confirmed the charges were dismissed and his client passed the required background check.