Homeowner shoots intruder who set his house on fire 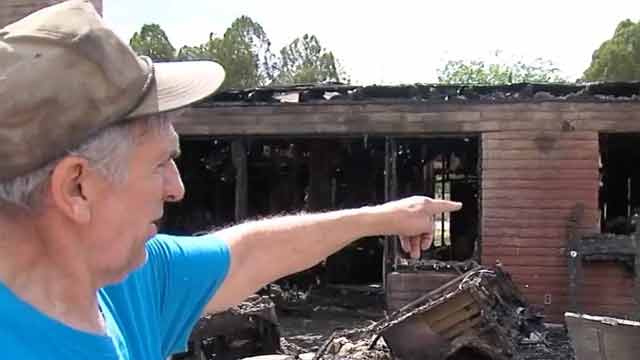 Dave Bowers said the sadness he feels for the loss of his friend’s life is greater than the anger he feels at the man who set the house on fire. (Photo: ABC)

A home invasion suspect is in the hospital recovering from a gunshot wound after he broke into a Peoria, Arizona, home last week and set the house on fire before being shot by the homeowner.

Dave Bowers told a local ABC affiliate that he awoke early on April 7 when his security alarm was activated. Bowers grabbed his .357 and as he walked through his house, came face to face with a masked intruder who was holding a blowtorch. Bowers said by the time he reached the suspect, he had already lit the carpet on fire in several places.

But when the intruder noticed Bowers, the two became involved in a physical confrontation. Bowers said the man asked him if he was concerned about the fire, but Bowers was not going to give in and continued to tussle with the suspect.

Eventually, with the blaze getting larger, Bowers said he knew he had to shoot the man, so he pulled the trigger. The intruder was struck in the abdomen and took off running out of the house and across a field, where Bowers proceeded to empty his gun on him. Bowers said he had his gun loaded with hollow-points and does not understand how the suspect got up and ran away.

“A .357 with a hollow-point round is devastating,” Bowers said.

Nonetheless, the suspect came in contact with first responders a few blocks away. He apparently approached them, admitted he was the one who set the fire, and said he needed help. He was transported to the hospital, where he was last listed in critical condition.

Meanwhile, deputies were the first to respond to the blaze, which had already caused serious damage to the home. They were also informed that there was still one resident, a 73-year-old man, trapped inside the home. Through a window, deputies could see the man lying on the floor unconscious, but due to thick smoke and massive flames, were unable to get to him.

When firefighters arrived soon thereafter, they made their way into the house to rescue Steve Krzyzewski. He was suffering from burns and smoke inhalation and rushed to the hospital, but died a short time later.

Deputy Chief Rick Picard, of the Peoria Fire Department, said the protective gear worn by the firefighter who pulled Krzyzewski from the burning house was burned, melted and completely destroyed. The firefighter suffered from non-life threatening burns. A second firefighter and a sheriff’s deputy also suffered from smoke inhalation.

Bowers said he does not know the suspect, who police say was released from jail two weeks prior to the home invasion and fire. He did say he thinks he was targeted, although the Maricopa County Sheriff’s Office has yet to release a possible motive.

“Somebody wants the property,” Bowers said, but did not elaborate.

According to Bowers, Krzyzewski was one of five individuals who rented rooms from him. He said he started renting rooms out in 2008 as a means to help others after the recession. Unfortunately, Bowers’ home was completely destroyed by the fire, but his sadness is far greater than his anger.

“I just hope that the day they bring that guy to trial, they remind the jurors how horrible it is to die in fire,” Bowers said. “Think about Steve dying in that fire. That’s all I have to say.”