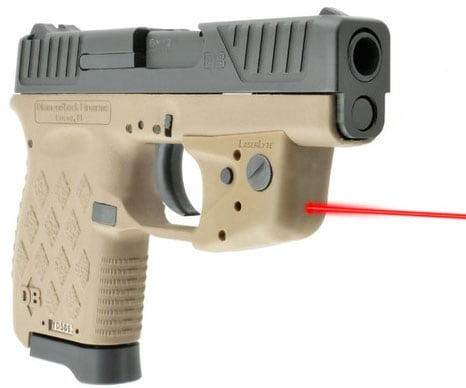 The Master Module Laser Sight is the heart of the system. It includes the laser, main housing, and switches, along with a tool set for installation or removal. It’s sold on its own for $75.

Buyers can choose from a range of Laser Light Sight bodies to affix the laser to their handgun(s) of choice. Sight body units are available for virtually all popular compact, subcompact, and full size semi-autos. The units can be mounted on an existing rail or attached to the front of the trigger guard. The body units are $20 each.

Laser Lyte says the units install in minutes, and represent a cost savings in comparison to purchasing separate lasers for each gun.

The units are available in a range of colors to match manufacturer finishes and provide a seamless appearance.

Other user-friendly features are an ambidextrous switch and six-minute automatic shutoff for battery preservation. The beam is programmable to be pulsing or constant. Changing batteries doesn’t require removing the laser.

Under the hood, the Master Modular System’s five-megawatt, Class IIIA laser is powered by three 392 batteries, which are included. Battery life expectation is a generous five hours in constant-on, or ten hours in pulsing mode.

Interchangeable lights have been around for quite some time, but an interchangeable laser is a breakout product. Laser Lyte’s invention should earn wide appeal.