Armed employee to robber: ‘I don’t think you’re going to get that money today’ 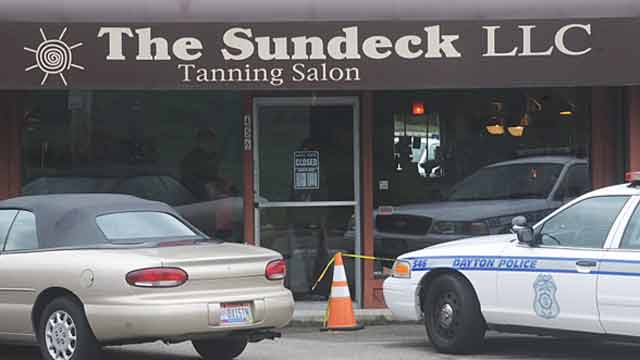 Dayton police say the tanning salon was one of three businesses hit within 15 minutes of each other Friday. (Photo: Dayton Daily News)

A man who was on an apparent robbery spree throughout Dayton, Ohio, was stopped in his tracks at a tanning salon Friday afternoon when he demanded money but instead got a gun in his face.

Police say they believe the suspect is responsible for at least five area robberies, three of which occurred within 15 minutes Friday. The two remaining robberies – at a smoke shop and a Circle K – happened earlier in the week. Dayton Police Lt. Joe Wiesman said the suspect first robbed a Dairy Queen on Friday, then made his way to the Sundeck Tanning Salon.

Bobby Hoblit, who owns the salon, told local news station WDTN that his girlfriend, Megan, was working at the front counter when the man entered the business and bought a ring with a handful of change.

Hoblit said as soon as Megan opened the cash register drawer, the man told her he didn’t want any trouble and to just give him all of the money. Hoblit said they keep a pistol under the counter, and it was then that Megan’s instincts kicked in.

“She grabbed the pistol, pointed it right at his face and said, ‘I don’t think you’re going to get that money today,’” Hoblit told reporters.

Megan never fired any shots, but the suspect quickly made his escape, only to hit another business. Minutes after Megan pulled a gun on him, the suspect robbed a nearby Subway restaurant as well. Surveillance video from several businesses captured images of the suspect, and on Saturday, the man was apprehended by authorities. He was identified as James Odum Jr., 51, and has a lengthy criminal history, which includes prior charges for burglary and theft.

Aaron Odum, the suspect’s son, said he saw his dad’s picture all over the news.

“Seeing your dad all over the news…to find out it’s really him, it’s hard,” he said.

But Aaron also noted that his father is “not in his right mindset” and has a serious drug problem.

“I’d rather him be in jail,” Aaron said, “instead of maybe getting shot in another robbery.”