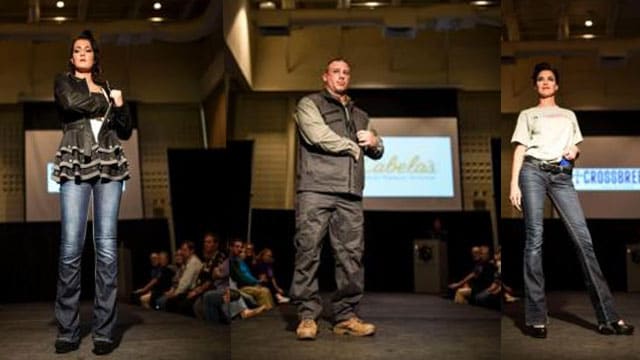 The US Concealed Carry Association Fashion Show is coming up on April 30. (Photos: USCCA)

On the evening of April 30, the Georgia International Convention Center in Atlanta will host the second annual fashion show of the US Concealed Carry Association.

Eight makers of concealment products will show their wares.  All will use the 2016 Concealed Carry Expo event to showcase new or revamped concealment wear.

Armed America radio host Mark Walters will emcee. It remains to be seen if any of Walters’ jokes will end in “or are you just happy to see me.” For the first time, men as well as women will grace the stage.

The event uses a combination of firearm industry professionals and professional models as the show’s talent.

“It’s really interesting to watch them bond backstage; the firearms professionals teach the models how to draw from their holsters and the models in turn teach how to walk the runway. Many of the models have become proficient shooters after participating in our show and have developed a love for the sport,” said show coordinator Marylin Smolenski, owner of Nickel & Lace.

The growing popularity of tailored menswear is bringing a new sponsor and new angle to the show. Men’s Warehouse is contributing garb to be worn in conjunction with concealment options.

Tickets to the show are $25. No one under 18 is allowed. Tickets can be purchased through the Expo website.

Dates for the general Expo are April 29 to May 1. The 160,000-member USCCA says their expo is the only one in the industry devoted to the concealed carry lifestyle.

The concept of concealed carry fashion shows isn’t new. They’ve been carried out before by the Realize Firearms Coalition of Ohio, Gun Powder Gals of North Carolina, and Smolenski has organized the Firearm & Fashion Show, which catered to female carry needs.

By all available accounts, though, this is the first concealed carry fashion show to include male models. Looks like we’ve come a long way, baby.