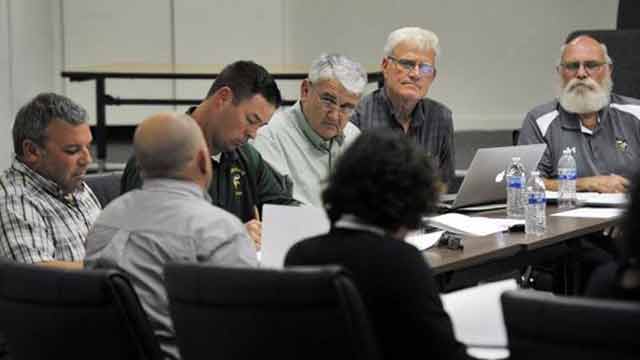 Superintendent Randy Morris said there was little opposition to the idea during Monday’s school board meeting. (Photo: The Fresno Bee)

Several staff members at California’s Kingsburg High School will be allowed to legally carry concealed firearms on school property thanks to a new policy.

The school board voted on the measure Monday and it was unanimously approved, The Fresno Bee reported. The new policy, which is effective immediately, will allow up to five staff members to carry guns on campus and even inside classrooms. The district is one of only two in the state that have enacted such a policy, but the other district, Folsom Cordova Unified, does not allow firearms in classrooms, but rather they are stored in a vault inside the school.

Kingsburg High School, which is located about 20 miles outside of Fresno and has an enrollment of around 1,200 students, is considered to be a rather laid-back school. The district currently has no police officers of their own, no fence around the school and students are even allowed to leave campus during their lunch breaks.

Superintendent Randy Morris said the decision to adopt the policy has left some questioning whether there was a recent threat or other incident that sparked the idea, but he assured that was not the case. Morris stated that he understands the decision is difficult for some to understand, but the school board realizes that – as with most schools across the country – there is an ever-present possibility that a shooting could occur at the school and the decision was simply one they felt was another option for keeping students and staff safe.

“I am a proponent of the Second Amendment,” Morris said, “and I’m also the biggest proponent of protecting the kids.”

But Morris also confirmed that before anyone can carry on campus, there is some criteria which must be met. Candidates will be chosen by Morris and their discipline records, evaluations and overall school conduct will first be considered. Next, Morris noted, the staff members must complete approved training before they will be allowed to carry. Furthermore, the armed staff will remain anonymous, with only Morris knowing who is carrying and who is not.

The policy was created with the help of Kingsburg police Chief Neil Dadian, who approved of the measure and noted he felt lives could have been saved at Sandy Hook Elementary during the 2012 shooting had staff members been armed.

“My opinion? If a staff member wants to put themselves at risk like that, I’m all for it. I think what they’re doing is everything they possibly can to protect their students, and God bless them for that,” Dadian said Monday.

But while there was little opposition to the measure during the school board meeting, not all are happy with the decision.

Mary Lou Swenning, who has grandchildren in the Kingsburg School District, made a “Wild West” reference when she learned of the new policy.

“Now we’re going to add something else for teachers to think about? Shooting people, really?” Swenning queried. “That’s a difficult thing for a police officer to do who’s been trained to do this, and you have a split second to decide if you should kill this person or not. I wouldn’t want that responsibility, and I wouldn’t want it for our teachers.”

Tamara Norris has a daughter in the school and both are concerned about teachers carrying weapons and especially not knowing which teachers are and which are not.

“I understand why you would not publicly announce who is carrying,” Norris noted, “but (my daughter) is wondering, ‘Who can I trust?’ It makes her very nervous. I can’t imagine she’s the only one.”

But Andrew Vorhees, who is also a student at the school, said he is all for the decision.

“My philosophy is I’d rather have a gun and not use it than not have a gun and need to use it,” Vorhees said. “I think it’ll be a good thing, but obviously, as cliché as it sounds, with great power comes great responsibility.”