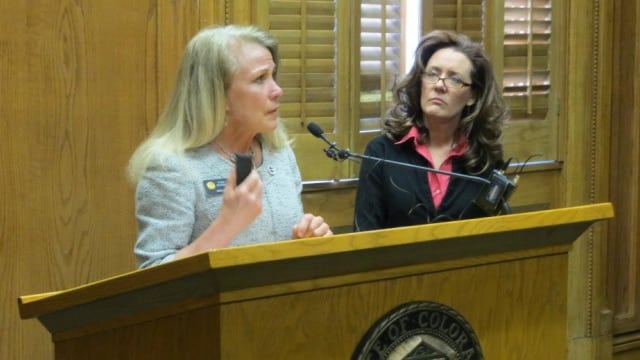 Republican majority leader Sen. Vicki Marble, shown with a handgun magazine, has pushed a repeal on Colorado’s law limiting them to 15 rounds through the Senate. (Photo: Colorado Observer)

For the second time in as many years, Republicans in the Colorado Senate on Tuesday gave approval to a bill to end the state’s limit on magazines holding 15 or more rounds.

The measure was introduced in January and, after squeaking through committee by a single vote, passed the full chamber 20-13 on its third reading April 12. Besides picking up all of the GOP senators, three Democrats jumped ship to back the bill.

Sponsors of the legislation feel restricting firearms accessories are not an answer to solve the problem of gun violence.

“Until we focus on the perpetrator or criminal who is intent on inflicting as much pain and suffering as possible on innocent people, we will never solve the issue of gun violence,” said the majority caucus chair, state Sen. Vicki Marble. “It takes a person to commit a crime, not an object.”

Marble’s proposal, SB 16-113, aims to repeal Colorado’s prohibition on the sale, transfer and possession of what are deemed large-capacity magazines defined as those capable of holding more than 15 cartridges. It would likewise void the current requirement that magazines manufactured in the state be marked indicating it was made after July 1, 2013.

The National Rifle Association terms the ban, which led in large part to firearms magazine maker Magpul to leave the state “arbitrary and misguided.”

A similar repeal measure passed the Senate in a partisan Republican vote last year only to be shot down by the Democrat-controlled House Committee on State, Veterans and Military Affairs. That same committee killed a House bill in 2014.

Now the magazine repeal will again be in the hands of the House SVMA committee, though a date has not been set for hearings.

That body killed five gun rights bills – including another magazine repeal effort – on the same day last month after seven hours of emotional hearings on both sides of the issue.

“It is important that we stand firm that we will not see these bills repealed,” said Rep. Beth McCann, D-Denver, at the time.