Nevada background check initiative is on the ballot 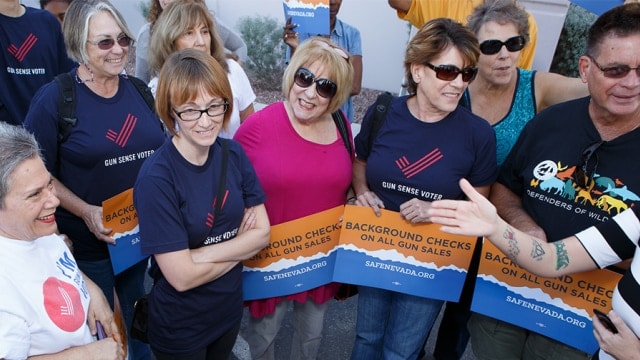 Voters in the upcoming general election in Nevada will have to decide if they support universal background checks. (Photo: Nevadans for Background Checks)

The Everytown-backed voter referendum to mandate background checks on all gun transfers will be Question 1 at the polls this November.

Nevada Secretary of State Barbara Cegavske announced the decision Monday to include the proposal on the general election ballot along with the Initiative to Regulate and Tax Marijuana, which will be listed as Question 2.

Soon after the win by gun control advocates for a similar measure in Washington state – largely bankrolled by former New York City Mayor Michael Bloomberg’s Everytown for Gun Safety group along with a handful of billionaire donors – they vowed to take their show on the road to Nevada.

The instrument of the initiative, Nevadans for Background Checks, was registered with Cegavske’s office in 2014 with Carson City lobbyist and attorney Matt Griffin and Everytown Treasurer Tara Paone listed as officers while Everytown itself was named as an affiliate.

The Bloomberg group so far has spent $3 million collecting and submitting over a quarter million signatures in their campaign.

On Wednesday Everytown, partnered with the Nevada Network Against Domestic Violence, released a 30-page report in which their analysis of FBI data contends women in the state are 65 percent more likely to be shot to death by intimate partners than women nationwide and that in at least two cases of homicides by former domestic partners the guns were obtained illegally through purchases by those restricted from gun ownership made through private channels.

“Abusers who are prohibited from possessing firearms are still able to easily obtain them in unlicensed sales — notably at gun shows or online — with no background check required,” the report states.

Pushing for “No” on Question 1 are state and local gun rights groups along with the National Rifle Association.

The Second Amendment organization contends Question 1 would not prevent crime, citing Bureau of Justice statistics of inmates surveyed who said they obtained their guns through theft, the black market, from drug dealers, or by straw purchase — all of which are currently illegal under existing law.

“Bloomberg’s NYC propaganda may say this is a gun safety measure, but we all know that this measure has nothing to do with safety or addressing crime and would only impact law-abiding Nevadans,” states the NRA’s Institute for Legislative Action in a statement Monday.