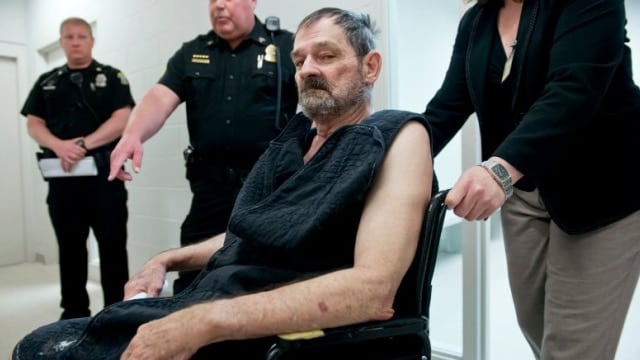 Former White Patriot Party leader Frazier Glenn Miller, on death row for killing three at a Jewish center and retirement community, purchased his guns through a straw buyer and those who sold them are now headed to court. (Photo: David Eulitt/AP)

Survivors of those killed in the Overland Park Jewish Community Center shooting in 2014 by a white supremacist are going after the stores that sold the firearms.

Frazier Glenn Miller, also known as Frazier Glenn Cross, was a former member of a number of different neo-fascist white supremacist organizations before he killed two at the Center and a third at a nearby Jewish retirement community. Miller, convicted of murder and other crimes, has been sentenced to death.

Representing himself in a bizarre trail, Miller admitted to the shootings in court but said he had acted in defense of the white race.

His guns were illegally obtained from a straw buyer as he was already a convicted felon at the time of the shooting.

John Mark Reidle purchased a number of guns for Miller, a prohibited firearms possessor, including the Remington 870 shotgun used primarily in the attack, lying on federal paperwork as to whom the ultimate owner would be. Reidle was charged with providing false information on a federal firearms form and pleaded guilty in October 2015.

Now, according to identical lawsuits filed in Jackson County Circuit Court and Johnson County District Court, the families of those killed by Miller are going after Wal-Mart, where the shotgun was sold, as well as a gun store in Lebanon Missouri and the operators of a gun show.

“Gun dealers, including Wal-Mart, owe a duty to use the highest standard of care to prevent the supply of firearms to those prohibited from possessing them,” noted both suits as reported by the Kansas City Star.

The suits’ take Wal-Mart to task, arguing that clerks there should have saw a warning flag that a potential straw purchase was underway when Miller, who they contend initially started the gun sale transaction, bowed out and allowed Reidle to buy the gun.

The shotgun was used four days later in the shooting.

“Given the circumstances of the purchase, Wal-Mart should have taken affirmative steps to confirm that Miller was the actual purchaser and intended user of the Remington shotgun, and that the sale of the shotgun to Reidle, a straw buyer, was illegal,” contends the court filing.

The litigation also names RK Gun Shows and Friendly Firearms of Lebanon for their role in selling Reidle other firearms ultimately intended for Miller.