Experts oppose changes, urge action regarding use of force parameters 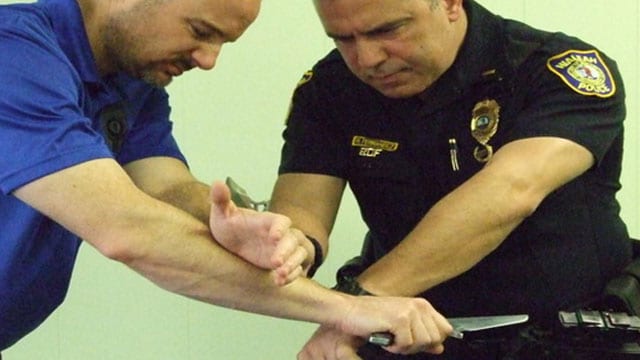 Experts say UK-trained officers expect to get cut when they engage a knife-wielding assailant.

In March, the D.C. think tank Police Executive Research Forum released a report called Guiding Principles On Use of Force to provide solutions to deescalate volatile situations without resorting to violence, but critics say the guidelines have far-reaching negative implications for police and public safety.

The 136-page report addresses local and national issues regarding police force, especially cases involving a subject with mental illness or where the subject does not have a firearm. Based on input from law enforcement agencies, officials and trainers from around the country and the United Kingdom, the report lists 30 principles that range from policy changes to adopting technology to improved training to even altering personal demeanor all in effort to reduce deadly outcomes.

Critics say the problem is principle and reality don’t stay as neatly paired in the real world as they do in the comfort of conference and training rooms. Two attorneys specializing in police use of force, both of whom have been police officers themselves, sounded an alarm about the implications of these recommendations.

In her column on the matter, attorney Mildred O’Linn, a nationally recognized expert on use of force and PERF member, raised concerns over how the organization engaged the public’s conflation of bad cops with all cops.

“Initially I would like to say that I was very disappointed that the overall theme of the PERF meeting seemed to be that American policing is bad: bad cops; bad tactics; and bad training,” she says, and adds, “Given the media’s focus on the ‘bad cop’ syndrome and plastering of the airwaves with the ‘epidemic of police abuse’ it appeared that PERF was validating that campaign by the presentation in that meeting confirming the ‘epidemic.'”

For instance, she raised issues over PERF’s repeated praise of how officers in the UK train and address subjects armed with a knife. “Armed police officers trying to wrestle with a violent subject (especially one with a knife), opens up the officer to being disarmed. Also just because someone has a knife, doesn’t mean they don’t have a firearm as well,” she says.

“As someone trained in British law enforcement spontaneous knife defense as an instructor, I can tell you that their officers expect to get cut when they are left in a position with no choice but to engage the knife-wielding assailant,” she says.

The recommendation that scenario training should play a bigger part in police training is broadly agreed upon. However, this recommendation assumes that officers are already well-skilled in a myriad of skills like communication and de-escalation, defensive tactics including disarming subjects, marksmanship and gun handling, and of course law. O’Linn’s statement reminds readers that many departments are stretched for personnel and/or training resources; and that adding additional training requirements to the mandatory menu of annual training isn’t realistic. “You simply run out of money and time to create the perfect cop,” she says.

O’Linn says that officers whose actions are out of line should be targeted for public scrutiny. However, the attention to such actions has been used to generalize messages about police that are damaging to community trust. Furthermore, she says in reference to the guidelines, “we will not improve the public confidence in our officers by creating expectations that contradict the laws that our officers have been told apply to their actions.”

Another recognized authority on law and use of force has chimed in on the guidelines. Attorney, author, and former Baltimore police officer David Bolgiano is concerned that officers will be forced into negotiation as a primary tactic rather than taking control of violent or escalating circumstances.  Bolgiano and an associate, Douglas Mitchell, posted a detailed statement on the issue.

In a recent presentation to a group of officers, Bolgiano says that PERF’s recommendations that U.S. police adopt European-style enforcement is “evidence of pernicious forces at work.” He groups PERF’s approach and the Black Lives Matter movement together as “Soros-funded efforts to fundamentally change things,” specifically referring to the guidelines’ recommendation that police be bound by narrower decision-making parameters than the language of Graham vs. Connor, the case currently used in U.S. policing to interpret “necessary and reasonable” use of force.

Referencing the Darren Wilson case in Ferguson, Missouri, Bolgiano said that while courts have defended actions taken by officers under Graham vs. Connor, he is concerned that the outspoken forces against reasonable and necessary use of force will change that.

Graham vs Connor is a reference not only for police, but for the standard of reasonable and necessary action taken under the totality of circumstances at the time of the incident is a measure by which civilian self-defense, with a firearm or not, has been subjected.

Bolgiano says the natural outcome of the proposed changes will be a society in which officers not only are punished for exercising good judgment, they may also simply ignore such confrontations when they’re not directly involved, in order to protect their own safety and careers.

To be clear that he’s not advocating a police state. “I deeply respect Dave Grossman and his work, but the sheep and sheepdog mentality is wrong,” he says. “We are all part of the sheep herd — some of us have the job of taking the trash out. We can’t afford to foster an us-versus-them mentality with the citizenry.”

“We who are doing our jobs and know the truth about use of force are generally a quiet bunch, going about our work and not saying much,” he says. “It’s time for that to change. You must let your chief, your elected leaders, and so forth know that the PERF guidelines will cause harm if agencies begin expecting officers to behave according to them.”