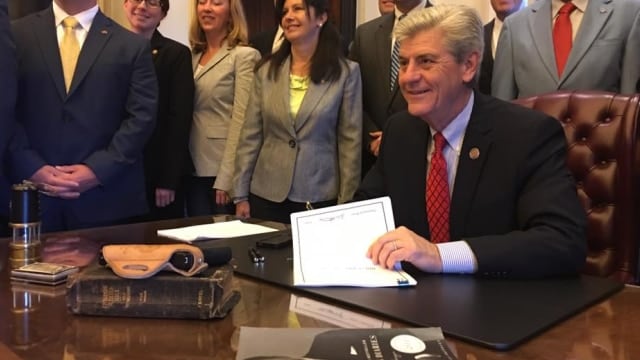 In the past three years Republican Gov. Phil Bryant has signed a number of expansions of Mississippi’s gun carry laws, adding a new one this week. (Photo: Governor’s Office)

With a holstered Glock, a tattered Bible and a copy of the Reagan Diaries on his desk, Mississippi Gov. Phil Bryant signed a multifaceted gun reform bill into law on Friday.

The measure, which passed the House in February in an impressive 85-33 vote, began life as a church security bill to allow those with a concealed carry permit to have a firearm in church. During its passage through that body, it picked up an amendment to allow unlicensed carry of a concealed gun elsewhere in the state so long as it is in a holster or scabbard on the belt or shoulder. The Senate approved the bill by a 36-14 vote in March.

“Today I signed House Bill 786 to give churches the right to protect themselves from those who would harm them while they worship,” Bryant said in a statement. “I’m a strong supporter of Second Amendment rights and will continue to advocate for your right to keep and bear arms.”

The 25-page modification to state law, HB 786, grants allowances for concealed carry by members of designated church programs and extends the state’s Castle Doctrine protections on justifiable homicide — currently in place in Mississippi for an individual’s home, automobile and business — to their place of worship as well.

There is also language in the measure to clarify that concealed carry with a holster does not call for a permit for any lawful gun owner in the Magnolia State, though the Mississippi Highway Patrol will continue to issue both standard and enhanced concealed carry permits. This builds on laws adopted in 2013 legalizing open carry and one last year to allow for carry in a purse or bag without a permit, both of which were also signed into law by Bryant.

As such, Mississippi now will join Alaska, Arizona, Arkansas*, Idaho, Kansas, Maine, Vermont, West Virginia, and Wyoming to become the 10th state to codify the right to carry a concealed handgun without first having to obtain a permit.

The move was opposed by gun control groups such as is Moms Demand Action which blitzed the state with ads complete with Southern drawl and banjo music, social media campaigns and mailers while contending 89 percent of gun owners in the state support requiring a permit to carry a concealed handgun in a survey paid for by Everytown.

“Our Governor failed us today,” said Shirley Hopkins Davis with the state’s Moms Demand Action chapter in a statement emailed to Guns.com Friday. “Mississippi law enforcement, families and faith leaders all spoke out against this reckless bill that will allow dangerous people to carry hidden, loaded handguns in pubic without a permit. Yet the Governor still signed this legislation into law.”

Hopkins contends the new law will allow people, including some violent criminals and people with dangerous mental illness, to carry handguns in public without a permit.

“We require a license to drive a car in Mississippi in order to keep our communities safe. Dismantling the system that requires a permit to carry a concealed handgun in public flies in the face of public safety and common sense,” she said.

The National Rifle Association, who lobbied hard for the bill in the Magnolia State, welcomed the news of the new law.

“Gov. Bryant stood strong for the Second Amendment by signing this significant bill, in spite of billionaire Michael Bloomberg’s attempts to spread lies about it,” said Chris W. Cox, executive director, NRA’s Institute for Legislative Action in a release sent to Guns.com. “It’s a great day for law-abiding gun owners in Mississippi. This will allow them to carry firearms for personal protection in the manner that best suits their needs.”

As noted late Friday by the Jackson Clarion-Ledger, the Glock 23 .40 caliber pistol displayed at the signing event belongs to Gov. Bryant, who also has a concealed carry permit.