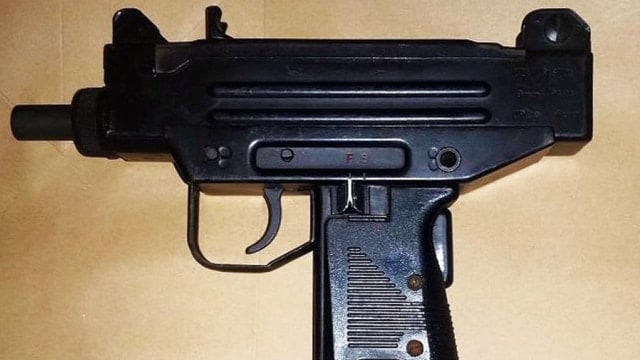 “YES THIS IS A FULLY AUTOMATIC UZI MACHINE PISTOL” screams the New York Police Department’s social media page in all caps over a picture of what really looks like a semi-auto pistol.

In a statement issued by the agency, Emergency Service Unit (ESU) personnel, the NYPD’s long-term special response team, were noted as arresting three and taking two firearms into custody while delivering a search warrant this week in Brooklyn. Arrested were Jamel Hines, 21; Ramel Hines, 33; and Frantz J. Pierre, 59; all of Brooklyn. The men were charged with a variety of gun and drug violations including Criminal Possession of a Loaded Firearm and Criminal Possession Machine Gun.

The guns in question: a .380 caliber Hi-Point pistol and a “9 mm Uzi machine pistol” along with about 220 rounds of ammunition.

The thing is, the image distributed by the department of the illegal machine gun is that of a IMI/Action Arms imported Micro Uzi which were semi-auto only as evidenced by the two-position selector switch for just a safety and semi-auto fire.

While it’s impossible from the single picture to say whether or not the Uzi impounded was later converted to a Title II firearm, as you would need to take a peak at the internals, the fact that they gun was made with a blocking bar to prevent a full-auto bolt from being added would seem to preclude that.

The NYPD has a thing for touting Uzi’s taken off the street.

Last October the agency showed off a collection of 112 guns bought from a street dealer in a year’s worth of undercover buys in a Walgreens parkinglot that included several “suppressed UZIs” which were Walther/Umarex MP .22 caliber semi-auto clones with fake cans.

BUT WHO ARE WE TO JUDGE?