‘One Rifle, Any Season!’ now trademarked 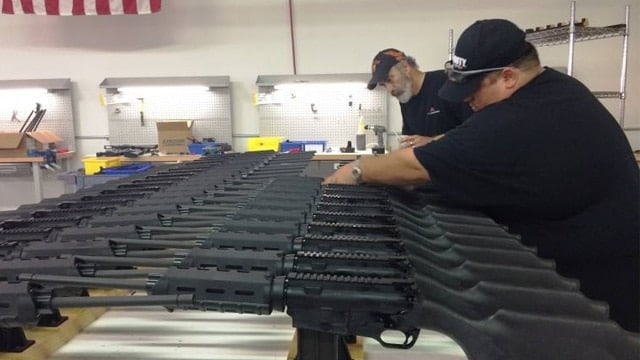 Ares “Master Assemblers” working on the assembly line at the company’s facility in Melbourne, Florida, on Aug. 1, 2014. (Photo: Ares/Facebook)

The U.S. Patent and Trademark Office issued the registration on April 12, a little more than a year after Ares Defense filed the request.

In a statement, the company said the trademark is generally associated with firearm products, in particular the Ares Sport Configurable Rifle (SCR), which combines aesthetic features of a traditional hunting rifle and an AR platform.

A records search shows Ares Defense has seven more trademarks registered with USPTO, including Ares SCR, Ares Self Defense, A -SCR-, Herring, MCR, Fight-Lite, and One Weapon, Any Mission!

A trademark is traditionally used to maintain brand awareness and prevent confusion with other products, but there are also far reaching legal benefits. If a competitor willfully infringes on a trademark (or a patent) — a common issue in the gun industry — and the matter is brought to court, the registered owner can be awarded monetary damages and then the competitor often must destroy inventory with the branding.

Although Ares Defense does not have a federal registration for the name, it argues it has claim because it has been registered in the state of Florida since 1999 and believes Ares Armor posted ads online in Florida.