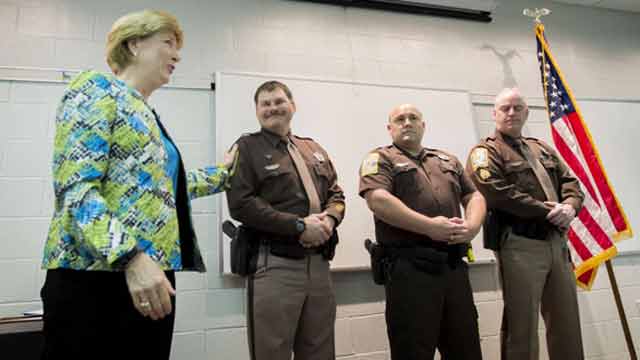 The deputies who responded to a tragic shooting last August in Virginia that was captured on camera during a live news broadcast were honored for their life-saving efforts Tuesday, and the only survivor had the opportunity to thank them.

Vicki Gardner, director of the Smith Mountain Lake Regional Chamber of Commerce, was conducting an interview with WDBJ-7’s Alison Parker at the Bridgewater Plaza on Aug. 25. In the middle of the interview, just before 7 a.m., disgruntled former station employee, Vester Flanagan, who was fired from his job two years prior, approached Parker, Gardner and cameraman Adam Ward and opened fire on live TV.

All three were shot. Gardner was the lone survivor. Flanagan, later during a pursuit, took his own life.

Within minutes, Franklin County authorities arrived on the scene of the shooting, but quickly called for assistance from neighboring Bedford County. Bedford County Sheriff’s Deputy Andrew O’Conner was the first to arrive on the scene after the call for help and the first to attend to Gardner. Moments later, Deputy Sgt. Chris Edmondson and Cpl. Mike Holt arrived.

After securing the scene, O’Connor, Edmondson and Holt tended to Gardner as best they could, then placed her in the safety of a police vehicle until an ambulance arrived on the scene.

“There was no question whatsoever about how they had exposed themselves to unreal harm,” Gardner said during the ceremony, The News & Advance reported. “But they came, and they evaluated and they saved my life. And I owe them, I owe each of you, my life.”

Garnder said the deputies were “true professionals” who acted with total disregard for their own lives. She also said the incident left her looking at law enforcement in a whole new light, noting that she is now “a new advocate for all the wonderful things that they do.”

O’Connor, Edmondson and Holt all received awards during the ceremony honoring their actions that day, while two other officers were recognized for their valiant efforts in unrelated cases.