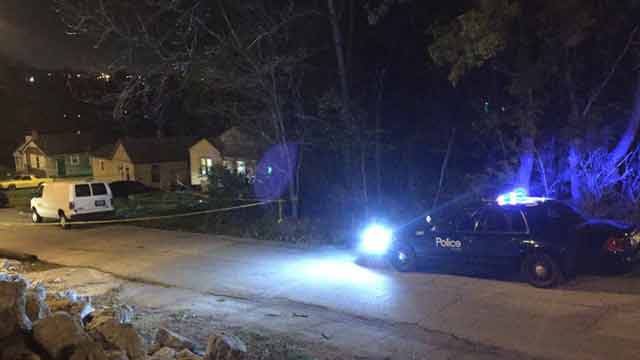 One neighbor told reporters that police sirens are so common in the area that they rarely catch her attention anymore. (Photo: KSHB)

A Kansas City homeowner, who said she feared for her life, shot and killed a man after he kicked down her door late Wednesday night.

Police were called to the home just after 11 p.m. when the homeowner said she heard someone repeatedly banging and knocking loudly at her front door. The woman, who is in her 40s but has not been publicly identified, said she became frightened, not knowing who was outside of her home at such a late hour.

Fearing for her safety, the woman grabbed a gun. Minutes later, before police arrived, the man outside starting kicking in the door. Once he successfully gained entry, the woman shot him, then placed another call to 911 informing authorities that the disturbance had turned to a shooting, local media reported.

When police arrived a short time later, they found the man lying on the front porch, suffering from a gunshot wound. Personnel with the Kansas City Fire Department pronounced him dead at the scene.

Authorities also learned that the homeowner and the man were acquainted and it wasn’t their first confrontation of the day. In fact, the intruder, whose identity has not been released, was a friend of the homeowner’s relative. He had come to her house earlier in the day, but she asked him to leave when she learned he was in possession of illegal narcotics.

The investigation is ongoing and once completed, the case will be forwarded to the district attorney’s office for review.

One neighbor, who did not wish to be identified, told KMBC she has been friends with the homeowner for years and feels like the shooting is a clear cut case of self-defense. She said if put in the same situation, she likely would have reacted the same way.

The neighbor pointed out that the homeowner already asked the man to leave, but then he returned, “not in a kind way.”

The neighbor concluded, “She had every right to protect her home and whoever’s in it.”

She also noted that the homeowner is disabled and uses a cane to get around. Her two sons sometimes stay at the home, but the homeowner’s toddler-aged granddaughter is almost always at her house, according to the neighbor.