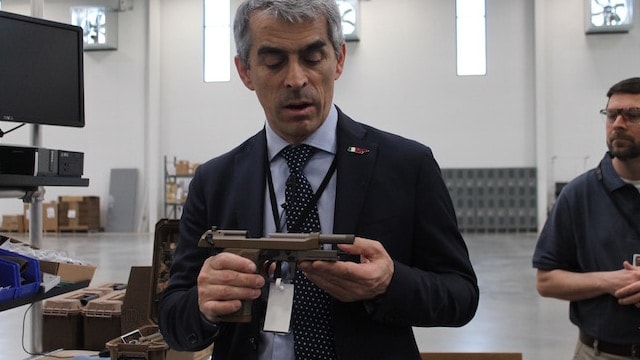 The Beretta M9A3 will be produced at the new facility. The first one was assembled and readied the morning of the ceremony. (Photo: Jacki Billings)

Beretta USA ushered in a new era of manufacturing Friday in Gallatin, Tennessee. With a host of local leaders and members of the Beretta family on site, the firearms facility officially began production on April 15.

Haslam was a driving force in bringing Beretta to the Middle Tennessee area, even going so far as to visit the Beretta family in Italy to persuade them down south.

“They didn’t really feel appreciated there,” Haslam said in reference to Maryland, where the company previously housed manufacturing operations in the U.S. “Obviously in Tennessee we take great pride in the Second Amendment and we are proud to have a company like Beretta move here.”

Haslam’s efforts didn’t go unnoticed. To thank the Governor for his partnership and cooperation, the Beretta family presented Haslam with the very first shotgun made in the factory. And the company is expected to provide 200 jobs to the area.

At the conclusion of the guest speakers, a dramatic current drop revealed the 156,000 square foot, modern facility. “This is a really big day for Tennessee. Beretta could have literally chosen any state in the country and they chose here. They built a world class facility,” Haslam said.

With formalities out of the way Francesco Franzini, vice-president of manufacturing and engineering, and Jeff Reh, Beretta’s general counsel and board member, invited journalists on a tour of the brand new building.

With production on its way, workers bustled around the shop assembling, fine-tuning and packaging firearms while Franzini discussed the future of one of Beretta’s most popular pistols.

Proudly holding up the M9A3, Beretta’s upgrade to the faithful M9, Franzini made a point to showcase this particular handgun to the crowd. “This is the first M9A3 produced in this facility. We just assembled it today. This is the new generation of M9,” he said.

Made to compete for the Army’s Modular Handgun System, a program designed to select the Army’s next service pistol, the M9A3 tweaks the M9’s design with a slimmer grip and internal component changes. Though the Army previously rejected the M9A3 design, Beretta still has hopes that political pressure will force military officials to re-evaluate it as a potential contender.

Citing the hefty price a new contract requires, Reh said hopes are that the Army will choose to stick with the M9 platform and simply upgrade to the M9A3. Ultimately, though, the decision is up to the military.

“What ends up happening with that program, we don’t know, but what we do know is this is available now if they need it,” he said.

Beretta is set to continue to manufacture the M9 through 2017 with the Gallatin factory taking on the full load of production in the summer.

In the meantime, Beretta has dipped a toe into striker fire territory with the 2015 announcement of the APX model. When asked when consumers can expect to see the next evolution of Beretta pistol, Beretta’s Executive Vice-President Franco Gussalli Beretta insisted that patience is key to Beretta’s commitment to deliver quality products.

“The M9, it took five years to arrive at the final conclusion,” he said, “We’ve started and what’s next is we wait,” he said.

By the end of the tour, journalists and guests were met with a picnic style lunch on the lawn and a bluegrass band — a fitting end to the ceremony and a perfect Southern beginning for Beretta.