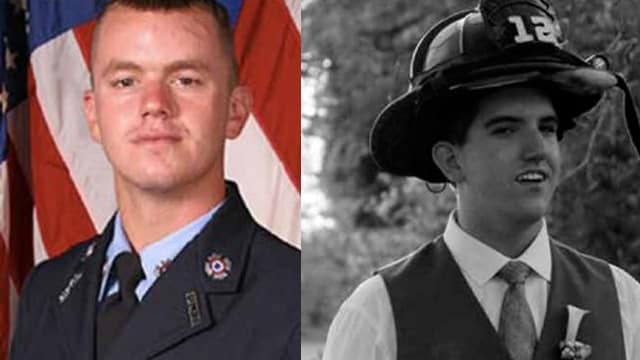 From the left: John Ulmschneider, 39, is a 13-year veteran of the department. Kevin Swain, 19, is still recovering but wanted to let everyone know he is “alright.”

A Maryland firefighter has died and another remains in the hospital after being shot Friday night during a welfare check in Temple Hills, but authorities say it isn’t likely that the man who fired the shots will face charges.

The diabetic brother was having some trouble controlling his blood sugar and had recently blacked out. His brother became worried when he did not answer the phone or his door, local media reported.

Firefighters arrived on the scene around 7:30 p.m., but repeated knocks at the door went unanswered. At that point, fearing the man may have been in danger due to medical distress, the firefighters made the decision to force entry into the home. Mark Brady, spokesman for the Prince George’s County Fire Department, said that the first responders felt — with the information they had — that it was imperative they get into the home as soon as possible.

“Time could have been of the essence,” Brady said.

But as the firefighters began knocking down the door, the diabetic brother, whose name has not been released, was unaware of what was transpiring and believed he was the victim of a home invasion. As the door was being broken down, he opened fire, striking two of the firefighters, as well as his brother, who was standing near the first responders.

Law enforcement officers were not on the scene at that time and none of the firefighters were armed. However, once the door was completely broken down and the man realized he was not in danger, he immediately stopped shooting.

All three shooting victims were transported to the hospital. John Ulmschneider, 39, succumbed to his injuries and later died. Kevin Swain, a 19-year-old volunteer firefighter, was shot four times and flown to a Baltimore trauma center where he underwent surgery and is expected to survive. The man’s brother suffered a non-life threatening gunshot wound to the shoulder.

The homeowner surrendered after the shooting, and according to local media, he is cooperating with investigators and was released after being questioned. Angela Alsobrooks, the Prince George’s County state’s attorney, confirmed that he is not being charged at this time.

It’s still unclear at this point why the calls to the man and the knocks at the door went unanswered.