Deputy has negligent discharge at work while aiming at another deputy 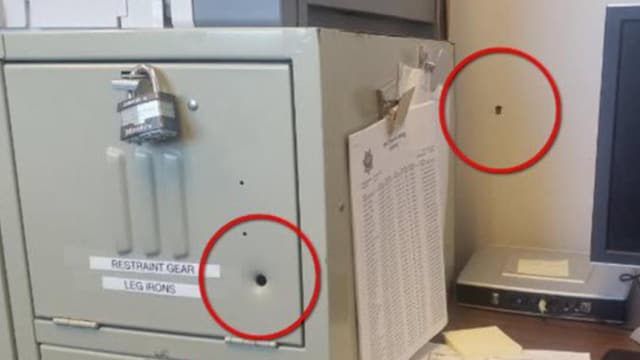 The gun used in the incident was described as a “22-caliber baby Glock” (We know, we know, just saying…)

An innocent equipment locker took the hit when a San Francisco sheriff’s deputy fired a Glock inside the Hall of Justice that he was trying to show another officer how to use.

The strange locker slaying was detailed by the local NBC affiliate and involved unarmed bailiff Rhonda Gaines, a 20-plus year veteran, who brought the gun to work but apparently wasn’t sure how to use it. Handing it over to Sotero Santos for a demonstration, Santos promptly aimed the personal weapon at Gaines and fired it without meaning to.

Luckily for all involved other than the office equipment, the round zipped through a nearby locked cabinet marked “Restraint Gear, Leg Irons” and into the sheet rock wall behind it.

The incident occurred near a judge’s chambers before court was in session and is being investigated.

“An accidental discharge of a firearm is a very serious matter,” said San Francisco Sheriff’s Department spokeswoman Eileen Hirst. “We are all very grateful that no one was injured.”