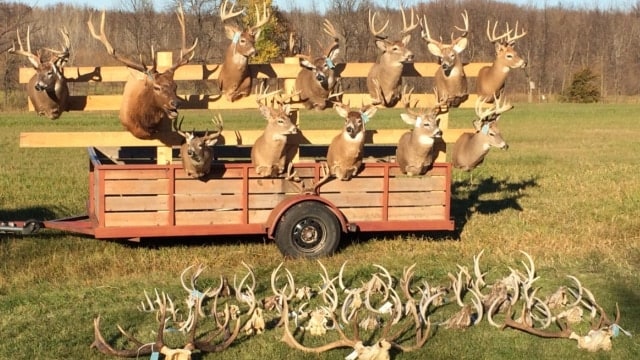 The Minnesota Department of Natural Resources in 2014 seized 37 guns, 28 sets of antlers and other items from a man whose case was thrown out last week. (Photo: DNR)

The high-profile case of a Minnesota hunter arrested by conservation officers after a five-year investigation was dismissed last week after a judge held the use of a tracking device without a warrant was unconstitutional.

Joshua Liebl made headlines repeatedly in the state since 2014 when Minnesota Department of Natural Resources officers arrested and charged him with 13 counts of various wildlife violations. Upon his arrest, authorities seized 37 guns, 28 sets of antlers and mounts, his truck and even an intact piebald deer taken from Liebl’s freezer. Some of the largest media outlets in the region profiled his case in-depth as it worked its way to trial.

The investigation, which began in 2009 from an anonymous tip, was the stuff of a Hollywood movie including aerial surveillance of his home, stakeouts of fields he was thought to haunt and even conservation officers planting a GPS tracking device on his truck in the predawn hours as it sat in his driveway.

However, Judge Thomas W. Van Hon of the Eighth Judicial District dismissed all charges in the case against Liebl last week, citing the attachment of a GPS device and remote tracking of his movements over a two-week period, which was later used as probable cause to search his home, was an unlawful search that violated the Fourth Amendment of the U.S. Constitution.

The device was planted on Oct. 8, 2014, but as outlined in a unanimous decision by the U.S. Supreme Court in U.S. vs Jones, required a search warrant — which DNR did not obtain. Instead, DNR had been granted a Tracking Order, which fell short in the eyes of the court.

The information about the truck’s whereabouts, when followed up by conservation officers, found tracks that would appear to show where a vehicle had backed up into wooded areas at night to point its headlights into a “combined field, wetland or alfalfa field” between 12:45 a.m. and 2:45 a.m. In one location, they found drag marks and a pool of blood, which led to police stopping Liebl who had a deer in the back of the truck at the time. This led to the search warrant for his home.

But without the GPS information, which was obtained without a proper warrant, everything discovered due to it was inadmissible as “fruit of the poisonous tree,” leaving DNR and the State without a case.

Liebl, 38, had a clean criminal record other than for a few traffic tickets and maintained his innocence throughout the past several years. As noted by the Minneapolis Star-Tribune, he and his former wife purchased at least 33 deer licenses between 2000 and 2014 and his family maintained he also hunted in other states, accounting for the large number of trophies in his home. As for the late night activities, a friend vouched that Liebl often drove around at night shooting skunks.

His attorney welcomed the ruling. “This is an important victory for the rule of law and for the privacy of sportsmen of Minnesota,” said defense attorney Bill Peterson in a statement. “It should establish once and for all that DNR enforcement officers are subject to the same constitutional standards as any policemen or other law enforcement officer.”

While Lac qui Parle County Attorney Rick Stulz is reviewing the case, Peterson is eager to help Liebl get his property back, which was seized 19 months ago.

“We are looking forward to DNR returning Mr. Liebl’s guns, hunting trophies and his pickup truck in the very near future,” Peterson said.