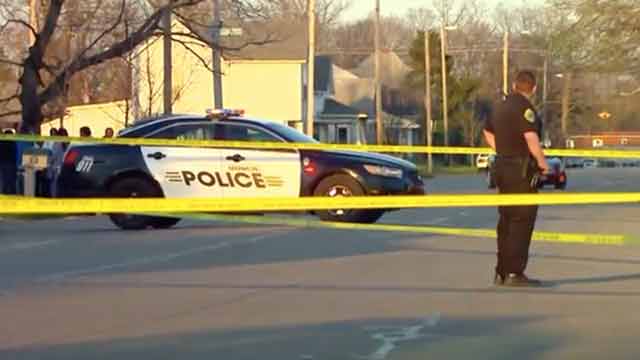 The police chief said people need to learn to solve their problems by talking, instead of turning to violence. (Photo: Fox 59)

Authorities in Muncie, Indiana, believe that a young man acted in self-defense when he shot two people — one fatally — Thursday evening.

Police say the two suspects, Vincent Wolfe, 21, and Rondell Wolfe, 25, who are cousins, had an ongoing beef with the man who shot them, but on Thursday it escalated to violent proportions.

the Wolfes followed the armed citizen, whose name has not been released, throughout the city that evening. There was a confrontation on the street, near an intersection, as the two remained in their vehicle, police told reporters.

Barnell Vance, who is the cousin of the armed victim, told local media they had all been feuding since winter, but did not elaborate on what the beef was about. Nonetheless, Vance said before the deadly confrontation occurred, his cousin attempted to talk to Vincent and Rondell in an effort to work things out, but that attempt failed.

Authorities indicated the Wolfes were both carrying weapons and when Vincent reached for a handgun, the victim pulled his own gun and opened fire, striking both Vincent and Rondell.

Vance said his cousin immediately called the police because he knew he acted in self-defense and did nothing wrong.

The two were transported to the hospital, where Vincent was pronounced dead. Rondell, who was shot in the back, was last listed in stable condition and expected to survive. The victim was uninjured.

The victim was taken into police custody for questioning, but later released. Authorities say, although the investigation is still ongoing, charges aren’t likely to occur.

Vance said his cousin is emotionally distraught over the incident, but feels he had to protect himself.

Now, although they did not indicate why, local law enforcement fears there may be retaliation over the shooting. In fact, they have stepped up patrols in the area as a precaution.

“We’ve got to be able to talk to each other,” he said, “and I think that starts at a very, very young age.”