Leech & Rigdon percussion revolver captured from the ironclad C.S.S. Tennessee at Mobile Bay, part of the Young Collection up for grabs. (Photos: Cowan)

What is being termed the “most important private collection of Confederate manufactured firearms ever assembled” will be sold to the highest bidder this month in Cincinnati.

Consisting of 42 lots, a large part of the Cliff and Lynne Young collection that was assembled over a 65 year period will be sold in just a day by Cowan Auctions, with subsequent offerings put on the block later in the year and in 2017.

Young was a studious collector, often documenting his guns to a degree far surpassing what is typically seen.

“Some of them have a file of provenance two-feet thick,” said Jack Lewis, Cowan’s director of Historic Firearms and Early Militaria in a statement.

As you can imagine, these are not your typical gun show relics.

“There are collectors who just buy Confederate arms,” said Lewis. “Cliff went deeper than that.Quality and historical significance were paramount. These are truly the best known examples of some of the rarest Confederate weapons ever produced.” 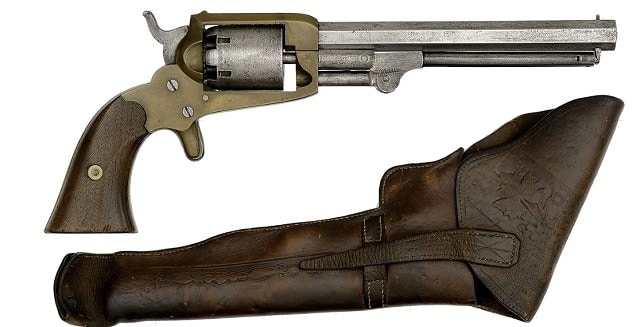 Extremely rare Confederate Cofer Third Type Revolver in its original holster as captured by 11th Maine Captain S.H. Merrill. Just 266 Cofer revolvers were picked up by the Confederate government and only 15 are believed to still exist.

An iconic Confederate carbine, this is the only engraved Robinson Sharps known to exist.

The unique, one-of-a-kind model for the LeMat revolver submitted to the U.S. Patent Office for protection against competitors.

Cliff Young’s notes indicate that this LeMat revolver relic was purportedly unearthed near the banks of the Harpeth River, near Franklin, Tennessee, site of the Battle of Franklin in 1864.

The only known surviving long-barreled LeMat, serial no. 18. The .42-caliber revolver has a 6.875-inch octagonal barrel, with a curious factory 15.75-inch octogonal-to-round extension barrel with front folding sight.

Serial No. 2 LeMat Krider Percussion Revolver Used in the Trials of New Orleans and Washington D.C. A total of two of these American-made LeMat’s exist, both sequentially marked. They are known in the literature as “Krider No. 1” and “Krider No. 2” in honor of their manufacturer. Krider No. 1 is curated in the Liege Arms Museum in Belgium.

The auction starts at 10 a.m. each day, with the Cliff and Lynne Young collection of Confederate arms selling on Tuesday. Bidding is also available by phone, absentee and live through BidSquare.com.

For the rest of the collection, estimated prices and much more photos, head over to Cowans.