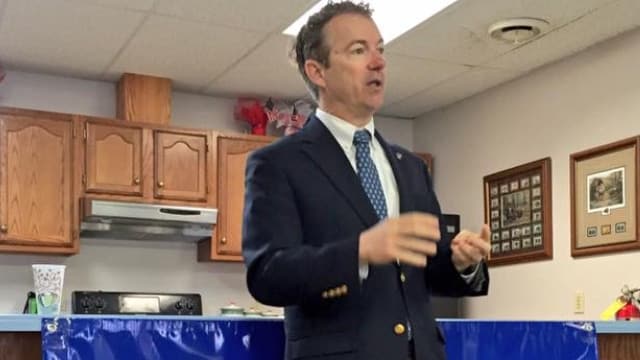 The Kentucky Republican has introduced legislation to allow more due process for those reported to the National Instant Criminal Background Check System by Veterans Affairs and Social Security Administrations.

Paul’s bill, the Protecting Gun Rights and Due Process Act, was filed in the Senate last week and aims to take the White House to task for a series of administrative decisions that have upped the number of prohibited firearms possessors added to the FBI’s database in recent years.

“The Obama administration is at it again, and this time they are unilaterally stripping gun rights from our nation’s veterans and seniors,” Paul said in a statement. “The Protecting Gun Rights and Due Process Act will provide necessary protection for gun-owning Americans, and ultimately ensure that the Second Amendment is not infringed upon.”

Paul’s measure, entered as S.2802, would require the Secretary of Veterans Affairs to review and remove from NICS any veteran currently reported by that agency that has not been adjudicated as mentally incompetent. Under the language of Paul’s proposal, no person could be added as mentally incompetent unless they have been properly adjudicated as such by a judicial officer or court and the person receives notice to participate with counsel, thus expanding due process protections.

Currently a veteran assigned a fiduciary trustee to act on their behalf is automatically declared “mentally defective” by the VA and is reported to NICS to regulate firearms possession without ever seeking to find out if the service member is a danger to themselves or others. As of December 2015, the VA has reported 260,381 individuals to the FBI, effectively making them prohibited firearms possessors under the law.

Next, the bill would prevent the SSA from reporting individuals to NICS unless they have likewise been adjudicated mentally incompetent. Much like the VA, the SSA is looking to report beneficiaries who have their monthly payments handled by someone else, termed a representative payee by the agency. It is expected the number of people added to the database by Social Security could top 75,000 per year.

The measure has the early support of Second Amendment groups such as Gun Owners of America and the National Association of Gun Rights. As for Paul, the one-time GOP Presidential candidate is slated to appear at the National Rifle Association’s annual meeting and exhibits in Louisville, Kentucky next month after a notable absence last year.

His legislation has been referred to the Senate Committee on the Judiciary.