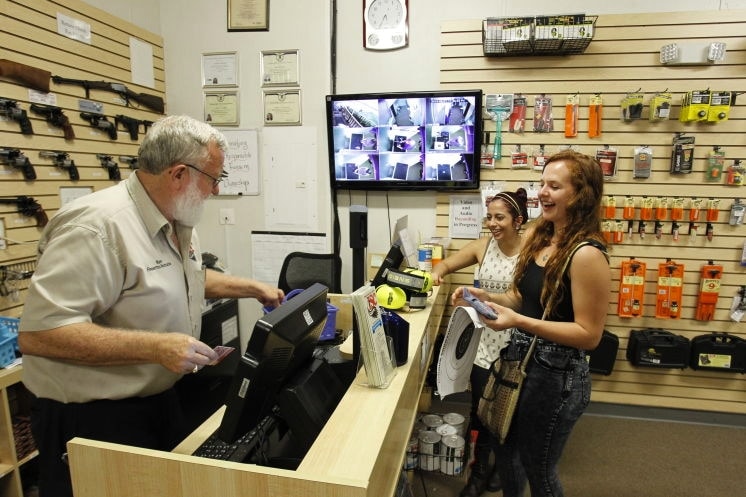 Indoor Shooting owner Ken Zellers chats with Amy Allen and Evangelon James after their recent target practice session at the E Fowler Avenue store in Thonotosassa. He says nearly half of his customers are younger than 40. (Photo: Tampa Bay Times)

Both sides in the gun debate have locked horns over the best way to go about protecting a coveted demographic — young women.

The National Rifle Association on Tuesday held up a recent poll that found millennial women, between the ages of 18 and 35, value protecting gun rights just as much as they do the issues of abortion access and equal pay.

The national poll conducted by ABC News and lifestyle website Refinery29 found that only the issues of economic inequality and student debt ranked higher on their list of political priorities, each issue resonating 21 percent. Gun rights, abortion access and equal pay — the latter arguably falling under the category of economic inequality — all received 11 percent favorably among all of the 566 young women polled.

“I think this poll reflects that all Americans — not just young women — all Americans are increasingly looking to their Second Amendment as a way to protect themselves,” NRA spokeswoman Catherine Mortensen told Guns.com.

Women especially, Mortensen said, are motivated to take control of their own protection and don’t want to have to rely on anyone else.

“It sort of carries on with the feminist tradition of empowerment. It emboldens women to take responsibility for their personal safety,” Mortensen said.

Though they may be willing to protect themselves or favor the protection of gun rights, fewer millennial women — 45 percent — identify themselves as feminists, mainly because they don’t like the term, the poll found.

“Women are taking these classes — they are jumping into this seeking training to be able to protect themselves at a faster rate of increase than men,” Mortensen said. “They don’t want to have to rely on a spouse, a boyfriend, a neighbor.”

But sometimes it’s one of those individuals who intends to harm a woman and instead of arming her Everytown for Gun Safety, a national gun control coalition formed by former New York Mayor Michael Bloomberg, wants to close loopholes that prevents dangerous people from obtaining guns.

“Of course millennial women care about preventing gun violence – especially when lax gun laws don’t protect us,” Taylor Maxwell, Everytown’s deputy press secretary, told Guns.com in an email Tuesday. “In far too many states, it’s perfectly legal for an abusive boyfriend to buy a gun, even though an abusive husband would be prohibited by law.”

The so-called “stalker gap” or “boyfriend loophole” allows those with misdemeanor stalking or domestic abuse offenses to pass a background check. Everytown’s own research shows there are 46 percent fewer women shot to death by intimate partners in the 18 states that require background checks on all handgun purchases.

And according to Everytown, a woman is five times more likely to be killed in a domestic violence situation is a gun is present.

“That’s why we’re working to make sure that millennial women know about the background check loopholes in the law that put young women, and in particular single women, at greater risk of gun violence – and calling on them to support candidates who put their safety ahead of the gun lobby’s interests,” Maxwell said.