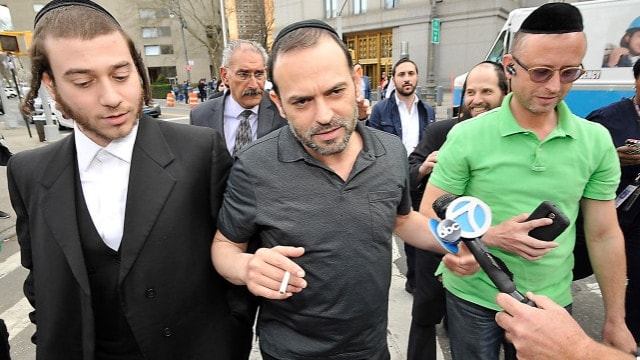 A number of officers have been reassigned as part of an investigation stemming from the arrest of a Brooklyn man who allegedly bribed officials to get as many as 150 gun licenses.

On Monday, U.S. Attorney Preet Bharara announced that Alex “Shaya” Lichtenstein, 44, had been arrested on charges of bribery and conspiracy to commit bribery in connection with his efforts to pay as much as $6,000 cash apiece to obtain gun licenses through the New York Police Department’s License Division. Lichtenstein is a member of the ostensibly unarmed Shomrim patrol, a Jewish neighborhood watch group.

This came a day after NYPD Internal Affairs Bureau detectives moved in and seized License Division applicant files, transferring an unnamed deputy inspector as well as a sergeant and officer, who were stripped of their guns and badges, to desk duty pending a review.

According to a 10-page complaint filed Monday by an Federal Bureau of Investigation special agent and signed by U.S. Magistrate Judge Henry Pitman, Lichtenstein began paying bribes as far back as 2013 for notoriously hard to get NYC firearm licenses.

Starting in 2015, the neighborhood watch member would trek down to License Division offices at One Police Plaza in Manhattan typically twice a week to meet with his contacts there to help Shomrim members and others obtain permits. Then at some point, his contacts there “shut him out.”

In early April, Lichtenstein approached an NYPD officer outside of the License Division he was familiar with, disclosing he charged thousands of dollars for his assistance in obtaining the licenses, then sought the officer’s help to get a new avenue to continue to obtain the permits. The officer declined and contacted internal affairs. This led to a sting on April 13 set up by the FBI and IAB to meet with Lichtenstein in Brooklyn.

Concerned the officer who had previously turned him down was now trying to set him up, Lichtenstein patted down the man for a wire unsuccessfully. The officer told Lichtenstein that, while he could not directly help him get the licenses as he was not in that division, he knew of a friendly union delegate in the office who could. After asking how much money was involved, Lichtenstein allegedly laid out big figures.

“I’ll give you and (the union delegate) more than you’ll make in the police department,” he said as caught on video and audio surveillance, offering $6,000 per license.

“I got so many license(s) in last year,” Lichtenstein continued, estimating he received 150 of the permits through his now-ended connections and he needed 150 more. He then took out a calculator and multiplied 150 by 6,000 showing the officer how much money he stood to make in bribes – $900,000. Nevertheless, he tried to make clear the money was not intended as a bribe.

Lichtenstein argued he was only a fixer in the process and that the individuals seeking the licenses were law-abiding and the bribes were essentially just to “expedite’ the lengthy investigation time, saying the process had been going on for the past three years. In lieu of cash, he said he helped previously friendly officers with things such as paying medical bills for their family members and said his contacts in the License Division only stopped working with him because so much money was being exchanged.

As part of the investigation, the FBI found out that Lichtenstein may have charged his customers as much as $18,000 per license.

His apparent closest connection at the License Division, a sergeant who had been assigned there for over a decade and had “near daily” interaction with Lichtenstein, told the FBI he only received “lunch money” from the man.

When Lichtenstein was arrested on April 17, authorities found photos of him with high-ranking NYPD leaders and an NYPD detective shield in his wallet.

While a review of the applicant files seized from the License Division earlier this week is ongoing, initial inspection has shown that at least one person who Lichtenstein paid the application fee for had been the subject of four domestic violence complaints including one where he threatened to kill someone.

Since Lichtenstein’s arrest, at least one person has come forward to say he spent $12,500 obtaining a license through the fixer despite the fact he had a criminal record that included felony burglary. However, when he attempted to purchase a gun, the transfer was flagged by the FBI.

After appearing in federal court, Lichtenstein’s attorney Richard Avery Finkel helped arrange a personal recognizance bond for $500,000 secured by the defendant’s residence with the caveats that he surrender his passport and firearms and have no contact with the NYPD’s Licensing Division.

A preliminary hearing is set for May 9.

The case is being handled by the U.S. Attorney’s Office’s Public Corruption Unit with Assistant U.S. Attorneys Kan M. Nawaday, Russell Capone, and Martin S. Bell in charge of the prosecution.

Police Commissioner William Bratton said Monday the probe would “continue to go where the leads take us.”