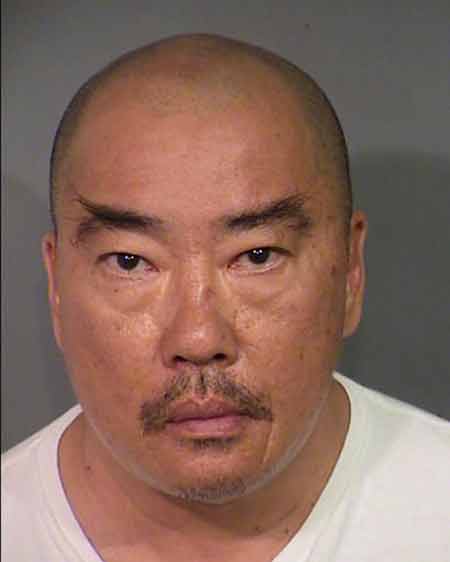 Norman Chen had a small bottle of urine wrapped in hand warmers in his pocket, indicating the no guns policy may not have been the only one he violated. (Photo: LVMPD)

An altercation between a Las Vegas bus driver and a passenger Friday evening ended in gunfire and while the driver is now behind bars, facing charges for attempted murder, he maintains he shot the passenger in self-defense after he was attacked.

Norman Chen said he was at the end of his route when he pulled up to the Silverton hotel-casino and told his last remaining passenger, Felipe Delgado, he needed to get off of the bus. But Delgado did not immediately get off the bus, but rather demanded Chen take him to another stop. Chen informed Delgado he could go right across the street to catch another bus that would take him further along the route, but still, Delgado refused.

From there, things quickly escalated, but that’s also where the story got sketchy.

Chen, who conducted an interview with local media from jail, said when Delgado refused to get off the bus, he stepped off the bus and called his supervisor as well as the police. But after about 10 minutes – and no police presence – Delgado approached Chen, threatened to kill him, then took a swing at him, knocking Chen in the head. Then, according to Chen, Delgado reached into his pocket and, fearing he was reaching for a weapon, Chen grabbed his gun from his pocket and fired at Delgado, striking him in the arm.

Chen said he then left and headed back to the transit center because he did not want to be near a man who just attacked him. But authorities scolded Chen for not staying on the scene. In fact, when Chen left, he continued on his route and even picked up another passenger. Likewise, according to reports from The Associated Press, police say Chen never contacted his supervisor or the authorities to inform them of the shooting.

And as it turned out, Delgado didn’t have a weapon and was instead reaching into his pocket to retrieve his cell phone.

Delgado’s account of what transpired was a bit different as well. He claimed Chen first shoved him and when he saw Chen reach into his pocket, Delgado fled on foot out of fear that Chen was reaching for a weapon. But Delgado said as he ran away, Chen shot him.

However, authorities obtained surveillance video that captured part of the incident and showed neither man was being entirely truthful. Detectives said the video shows Delgado hit Chen then run away, with Chen giving chase and shooting Delgado as he fled.

Chen, who has a valid concealed weapons permit, has been driving the bus for about five years, but remains on administrative leave, pending the outcome of the investigation. Likewise, the Regional Transportation Commission has a strict no guns policy, which Chen obviously violated. Chen said he did not intentionally bring the gun to work though. He said his regular work jacket was dirty, so he grabbed another one, not realizing the two-shooter was in his pocket until he was already at work.