Buy fake ricin from the FBI online: Get 16 years in the clink 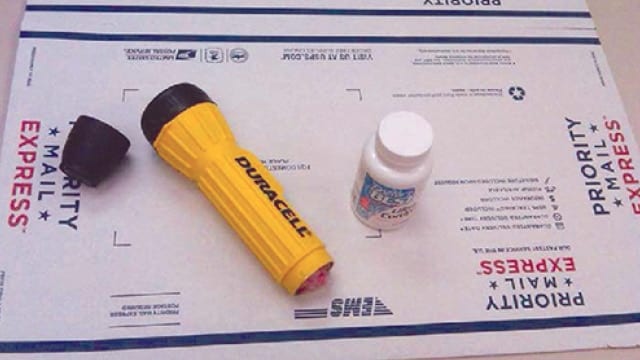 The shipment sent by the FBI to Cheng Le contained, among other things, a pill bottle holding a single phony ricin tablet. (Photos: FBI)

The FBI released more details Tuesday about the case of a Chinese national living in New York who was sentenced last month for attempting to purchase ricin through the internet.

The case involved Cheng Le, 22, who was arrested in Manhattan on December 23, 2014, by the FBI and charged with attempting to acquire and distribute ricin and committing postal fraud. The highly potent and potentially fatal toxin popularized by it’s use in Breaking Bad by certain individuals who knock was the object of Le’s desire but in his quest to obtain it via the internet, he stumbled instead on an employee of the FBI who was trolling hard on a particular Dark Web marketplace using an encrypted messaging service.

Le’s messages to the online covert employee kinda ruled out hobby or entertainment use of the ricin:

“If [the ricin’s] good quality, I’ve already had buyers lining up.”

“Does ricin have antidote? Last I check there isn’t one, isn’t it?”

“Injection can be difficult to pull off. Ricin doesn’t work immediately. You wouldn’t expect the target to not fight back after being jabbed.”

“The client would like to know . . . if it is wise to use ricin on someone who is hospitalized. . . .  Injection will leave needle holes on the body which could be found in regular forensic examination. But hospitalized people already have needles in them so it wouldn’t be suspicious. Thing is, would ricin make the death look like someone succumbed to the injuries after an accident and didn’t make it through? In that case then, a little anethestical [sic] gas in the target’s car, get him drowsy when driving, get into an accident, and then kill him in the hospital bed.”

“I probably told you this before, about mixing one and only one toxic pill into a bottle of normal pills. They all look identical. And as the target takes the medicine every day, sooner or later he’d ingest that poisonous pill and die. Even if there is a murder investigation, they won’t find any more toxin. 100% Risk Free.”

“If you can make them into simple and easy death pills, they’d become bestsellers.”

“I’ll be trying out new methods in the future. After all, it is death itself we’re selling here, and the more risk-free, the more efficient we can make it, the better.”

“Also, besides that one bottle of pills with one poisonous pill in there, can you send some extra loose powder/liquid ricin? I’d like to test something.”

Once the deal was done via bitcoin, the FBI dutifully mailed Le a package of fake ricin to his postal box in Manhattan which he had under a fake name. The fake ricin even glowed under ultraviolet light just like the real thing. 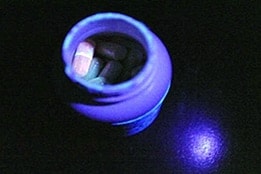 The phony pill sent to Le glows under ultraviolet light, just as real ricin would.

After picking up the package (wearing rubber gloves) and taking it home, Le’s place was searched by the feds. He was then arrested and charged in federal court where he was found guilty after a four-day jury trial before United States District Judge Alison J. Nathan last August and sentenced to 16 years in prison plus five years of supervised release.

The tried and true chatting-with-an-FBI-agent-online-to-buy-some-fake-ricin gag hasn’t gotten old though. In 2015 a man in Liverpool, England purchased five vials of bogus ricin through the dark web and was promptly picked up to see what Her Majesty’s prisons look like.

Unlike Le, however, the Brit only got eight years.