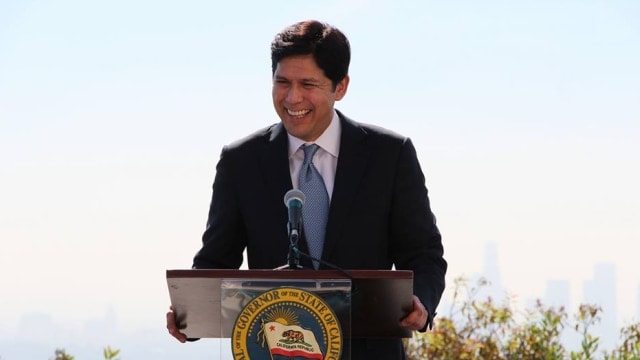 Democrats on the Senate Public Safety Committee were able to push through six gun control bills Tuesday in what opponents are calling “GunMegeddon.”

The proposals include restrictions on “ghost guns,” retroactive bans on currently grandfathered firearms and magazines, outlawing the use of “bullet buttons,” founding a state-run Firearm Violence Research Center, changing how California defines ammunition and requiring the reporting of stolen guns. The bills all passed in 5-2 or 4-3 votes along party lines.

“Times have changed,” said Senate President Pro Tem Kevin de León, sponsor of two of the bills. “And when these weapons are flooding the streets and putting our law enforcement agents in jeopardy – our communities in jeopardy – we as policy makers need to step in as quickly as possible.”

The measures that passed are sweeping in their potential impact on how California regulates guns.

SB 880 aims to revise the definition of “assault weapon” to mean any semiautomatic centerfire rifle, or a semiautomatic pistol that does not have a fixed magazine but has any one of those specified attributes. As such, it goes after the long misunderstood “bullet button” by mandating guns with a fixed magazine would have to be disassembled to remove the magazine.

SB 1006 would establish a Firearm Violence Research Center at the University of California to study gun violence as a health care issue. The bill would require the university to report, on or before Dec. 31, 2017, and every five years thereafter, specified information regarding the activities of the center and information pertaining to research grants.

SB 1235 started off as a bill relating to public employees’ retirement but was rewritten by De Leon as a mandate to adjust the state’s definition of what constitutes ammunition as a result of the Parker lawsuit which repealed the Senator’s AB 962. Signed into law by Gov. Schwarzenegger, that bill required the licensing and registration of handgun ammunition sales and even threatened some reloading components as well.

SB 1407 is a reboot of De Leon’s infamous ghost gun legislation of 2014 that was vetoed by Gov. Brown. It would require a California Department of Justice Bureau of Firearms background check and authorization before assembling a firearm in the home of a state resident, which in turn would have to have a serial number. Additionally, before this could be granted, the candidate would have to show proof that building the gun would not violate local city or county codes. In effect, adding multiple layers of regulation to a process that is already legal under federal law.

SB 1446 would revise the state’s definition of a high capacity magazine to forbid those capable of holding more than 10 rounds of ammunition, including grandfathered magazines. Several similar laws have popped up around the state backed by municipalities in recent years. Brown has vetoed comparable legislation in the past.

A seventh bill, SB 1037, which would have expanded prohibitions against persons bringing in a firearm from other states, was scheduled but not voted on.

Gun rights groups, including the National Rifle Association, California Rifle and Pistol Association and the Firearms Policy Coalition, the latter of which termed Tuesday’s vote “GunMegeddon,” have been rallying support against the blizzard of new Second Amendment legislation.

“Overall GunMegeddon was exactly what we thought it would be,” Craig J. DeLuz, director of communications with the FPC, told Guns.com on Wednesday. “Anti-gun legislators largely ignored the facts, reason and the constitution and moved their agenda along to the next level.”

But gun rights are not completely down and out in the Golden State, as DeLuz pointed to an important victory in the Assembly earlier this month when a proposal to require video surveillance of shops including all purchases and parking lots as well as put a limit on gun store locations was pulled in the face of mounting opposition.

“Defeating AB 2459 was a total group effort. we worked hard at FPC to build a coalition broad coalition which even included the National Federation of Independent Business and the American Civil Liberties Union,” said DeLuz, “How often are you going to see those two groups on the same side of an issue?”

Moreover, he promised to continue to fight the bills moving forward in further Senate hearings.