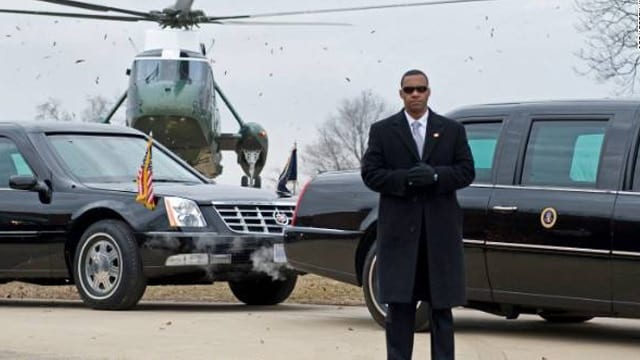 Is this Secret Service agent carrying a rifle under that coat? Maybe. One requirement is the rifle must be “discreet.” (Photo: Secret Service/Facebook)

The U.S. Secret Service this week released answers to questions asked during conferences with vendors interested in bidding for a contract to supply the agency with new rifles.

To the 153 questions listed in the document, most responses are full of dry, redundant, bureaucratic sounding language, but they also give insight into the agency’s procurement process. The leading question is about the desired weapon’s service life, which the agency goes into detail about definitions behind the phrase and testing procedures.

The Secret Service says the weapon needs a barrel with a service life of 20,000 rounds and defines the phrase “service life” in terms of accuracy and velocity requirements. “Both will have specific/clearly defined acceptable levels of degradation over the course of the 20,000 round requirement,” the agency says.

The Secret Service says it uses the measurement because it has been identified by its armory as a “regularly achievable benchmark weighted against current workload.”

For finalists selected for reliability and endurance testing, the agency says the weapons will fire 20,000 rounds — or the minimum service life.

For endurance, a two-person team will test the rifle with one person shooting and the other loading magazines. They will fire 150 rounds through the weapon and engage targets at multiple ranges. They’ll fire the first four magazines in semi-auto mode, and the fifth magazine in full-auto by using three- to four-round bursts. The agency specifies that it will not do a 30-round mag dump.

Throughout the testing, the agency will monitor bore wear of the rifle to see if it is flaking or peeling, and to monitor erosion of the gas port.

In response to whether or not the testing is “pass/fail,” the agency says that a weapon can fail if there’s a “catastrophic failure,” meaning the firearm is rendered unsafe or non-operational. The agency adds the testing is primarily to collect data for a comparative assessment.

The agency issued the pre-solicitation last month, specifying it wants a rifle featuring ambidextrous controls, a direct-impingement gas-operated system or a short-stroke gas piston system, and have a select-fire option — burst is not acceptable.

The agency lists specifications for the rifle without accessories as 8.5 inches tall, 34 inches long, and weighing no more than 7.5 pounds. It also includes a 5.56mm chambering, and a 10- to 12-inch long barrel with a 1-in-7-inch twist.

The Secret Service says it plans to officially solicit for the award within 180 days and issue the award by October 2017. It is currently unclear how much the contract will be valued.