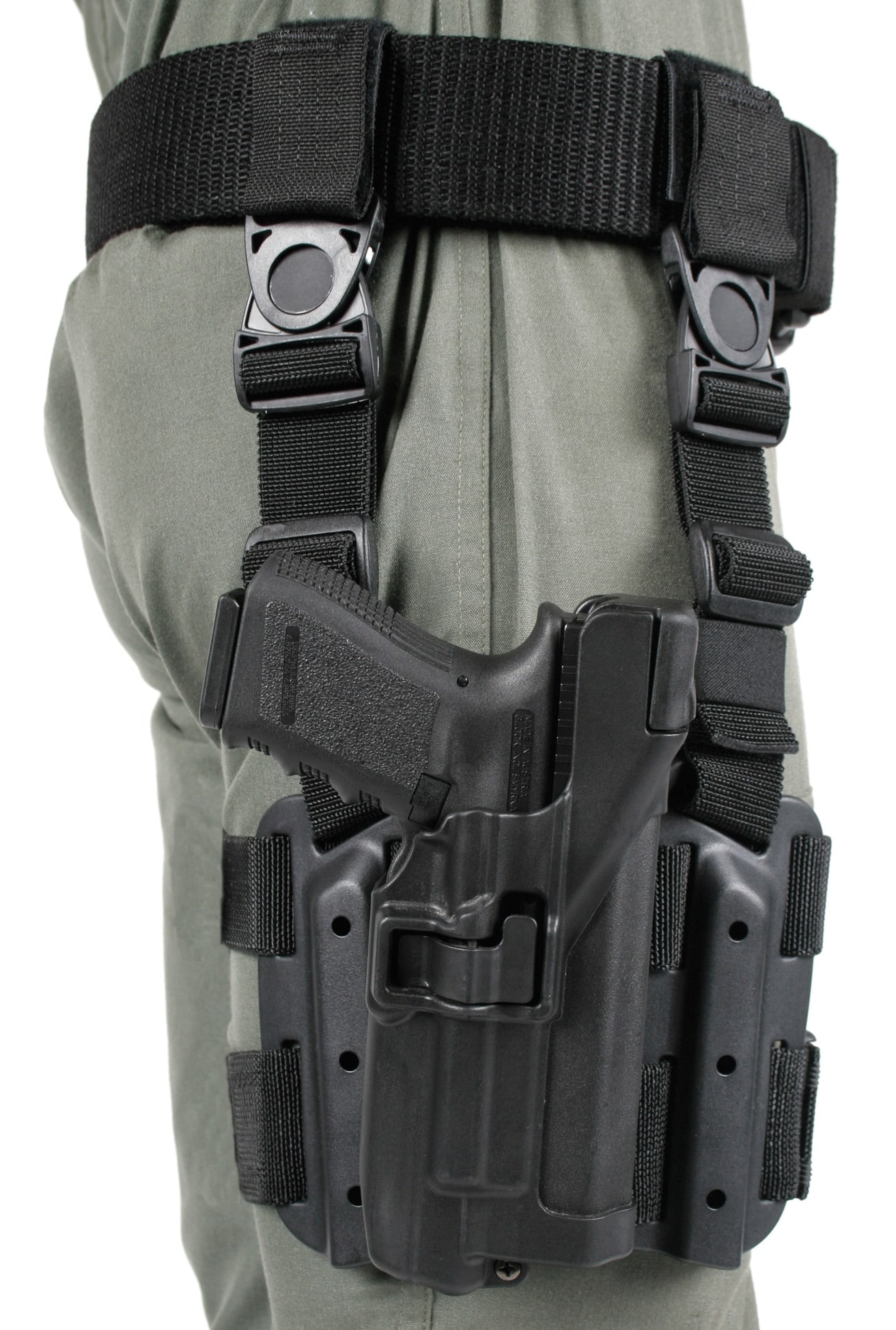 A Serpa holster made by Blackhawk, worn as a thigh rig.

The Swiss Army announced a new purchasing agreement to adopt the Serpa holsters, despite increasing bans and safety concerns by tactical training groups.

In addition to the security element, another attraction is that it’s designed as a platform. With the right attachments, the holster body itself can be secured to a belt, thigh rig, automobile dashboard, or MOLLE. It’s also lightweight.

However, Serpa Level Two models are banned or highly discouraged by many well-known shooting schools/instructors. The Federal Law Enforcement Training Centers, Gunsite, Vickers Tactical, and Kyle DeFoor are among them.

Those bans stem mostly from a history of wounds resulting from negligent and accidental discharges while using the holster. The wounds are common enough to have earned a name — Serpa bite — in the training industry. Typical injury configuration is an entry wound just below the holster on the lateral side of the thigh, and an exit wound just above the knee, on the medial side of the leg. Several variations of the wound are cited online.

Two causes for Serpa holster-related injuries are cited. By far the most common is related to drawing and the fact that the trigger finger must be depressed against the outside of the holster to release the gun. While admitting that that holster retains the weapon securely, an unidentified FLETC personnel responsible for training firearms instructors for Department of Homeland Security had this to say after being assigned to study and film officers using Serpas during routine and high-stress training:

Those comments contributed to FLETC’s ban on Serpa holsters.

The FLETC study unfortunately does not give a sample size nor hours spent in testing. Its conclusions are consistent in some ways with those of Missouri-based Tactical Analysis Group, a law enforcement training facility which has published its own assessment of the holsters.

These authorities agree that, the more stress is induced into training exercises, the more likely inadvertent, premature finger-on-trigger action is when these holsters are worn.

They diverge on the profile of the likely victims of these self-inflicted wounds. The FLETC analysis points a finger at less-experienced officers, while TAG’s anecdotal evidence (from both street and range) says experience makes little difference.

Besides drawing, there are numerous reports available online of accidental discharges upon reholstering into the Serpa. Several sources report incidents in which the retention mechanism became clogged with dirt, mud, or snow, creating an obstruction around the retention lever that apparently depressed the trigger.

TAG’s harsh criticism of the Serpa goes beyond that which is covered in the FLETC analysis, saying the holsters’ construction is too weak for duty use. Their explanation, rich with photographs, asserts that Serpas have been broken during force-on-force training exercises where attempted theft of an officer’s gun is simulated. They also claim that, during certain exercises, guns have been too securely locked into place, requiring “catastrophic disassembly” of the holster with a hammer to remove the firearm.

The FLETC analysis mentions recruits’ preference for this easier-to-activate release as compared to Level Three holsters, which have a thumb-operated shroud over the back of the slide or backstrap, as a reason for Serpa’s appeal in some sectors. Retention devices of any sort, particularly thumb-driven, take valuable time to defeat. However, active retention devices are a long-accepted standard for duty holsters.

For all their criticism, virtually all sources agree that the Serpa’s retention is secure — perhaps too much so — once safely attained.

Most critics place at least partial blame for Serpa-related injuries on the shortcomings of human performance under stress. Even a shooter who has experienced ‘Serpa bite” stated publicly that his injury was caused not by the product, but his inattention to the status of his trigger finger on the draw.

No other tactical holster has been the subject of so many safety advisories, from both the uniformed field and the hay field.

Whether the choice of the Swiss Army and other military groups is driven by popular demand or something else is unknown. Perhaps price is a factor. Usually offered in the mid-$30s, Serpas are priced competitively with passive retention holsters in the civilian market, but offer a wider range of mounting accessories. What is clear is the Serpa design is associated with unintended discharges in stressful or austere conditions.