Bringing to a close the 11-year saga of the Danziger Bridge shootings, five former New Orleans police officers received sentences of up to 12 years in prison for the shooting of a half-dozen civilians.

On Sept. 4, 2005, less than a week after Katrina swamped the city flood waters and left it without power, New Orleans Police Department officers Kenneth Bowen; Robert Faulcon, Jr.; Robert Gisevius, Jr.; and Anthony Villavaso II opened fire on a group of unarmed civilians at the at the Danziger Bridge, which carries U.S. 90 over the Industrial Canal.

Once the clean-up started and New Orleans began to recover, a subsequent investigation into the shooting was smoke-screened by the department with at least one officer, Arthur Kaufman, convicted for his role in the cover-up.

While the state brought up seven officers on charges in 2006, those charges were thrown out and in 2010 a federal indictment was handed down on five of those involved in the shooting and cover up, bringing them to trial on civil rights and obstruction charges. A jury produced guilty verdicts and in 2012, U.S. District Judge Kurt Engelhardt handed down sentences ranging from six to 65 years on the former law enforcement officers.

However, following an appeal and a yearlong investigation into claims by the defendants that prosecutors posted anonymous comments in The Times-Picayune about the case during trial, Engelhardt in 2013 ordered a mistrial, which was upheld by the U.S. Court of Appeals for the Fifth Circuit in a historic 7-7 split.

This led to the five defendants, whose 2012 sentences were voided, pleading guilty this week to much reduced ones. Faulcon received 12 years, down from 65. Gisevius and Bowen received 10 years, down from 40. Villavaso got seven years as opposed to the original 38 while Kaufman, who was involved in the cover-up only, will get three years down from the six he was given in 2012.

The case of a sixth officer, Sgt. Gerald Dugue, was severed and remains pending.

“Today is the first day of the rest of my life. I finally got what I wanted: Someone confessed, ‘I did it,'” said Sherrell Johnson, whose 17-year-old son James Brissette was killed in the bridge shootings.

“While an imperfect resolution, today’s proceeding ensures that these defendants are held accountable for their criminal actions,” U.S. Attorney Ken Polite said. “As the son and brother of police officers, I know all too well that serving as an officer is perhaps the most complex and difficult job in our society.  At the same time, when individuals ignore their oath of office, and instead violate the civil rights of the public they are sworn to serve, they will be held accountable.” 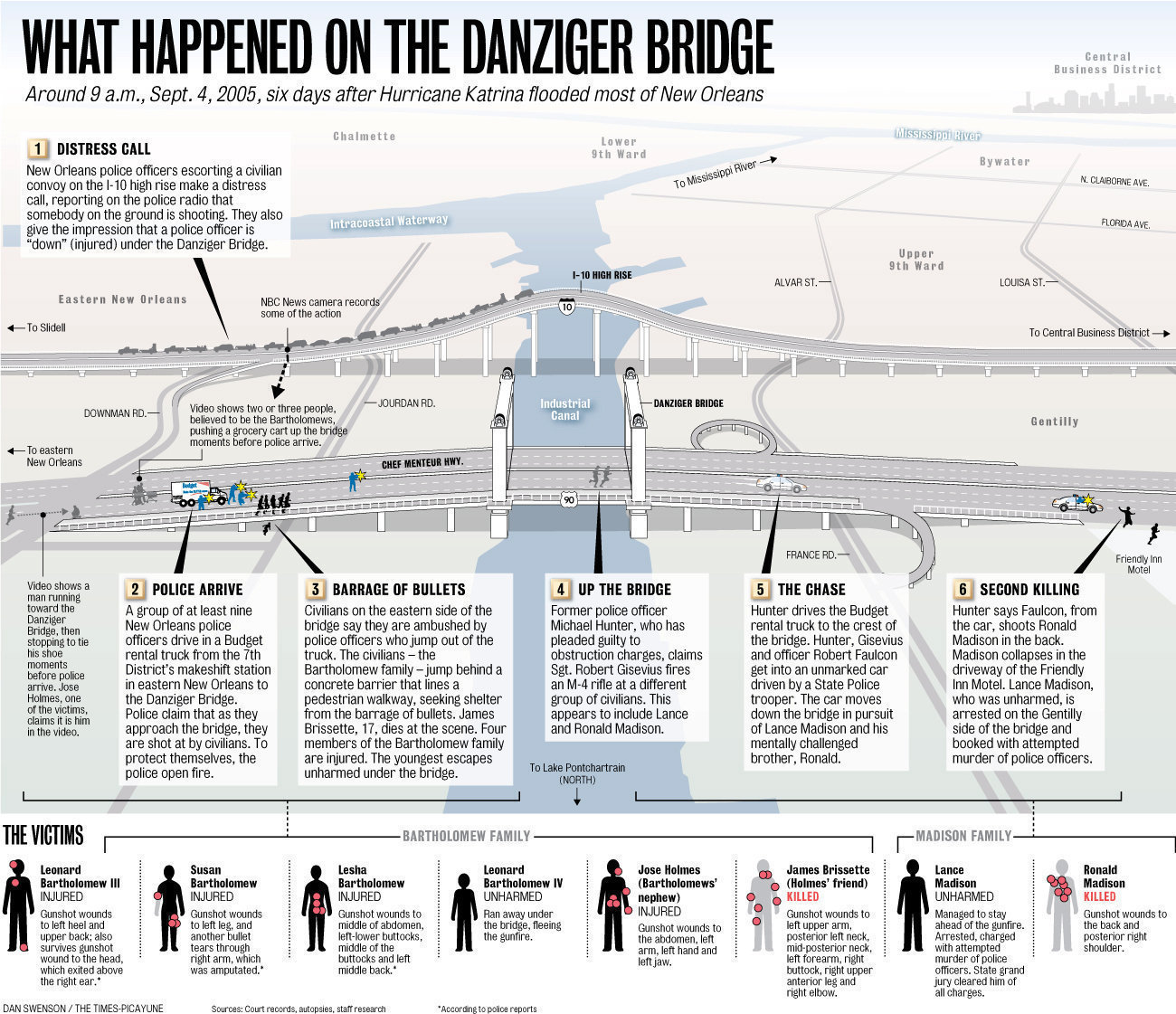