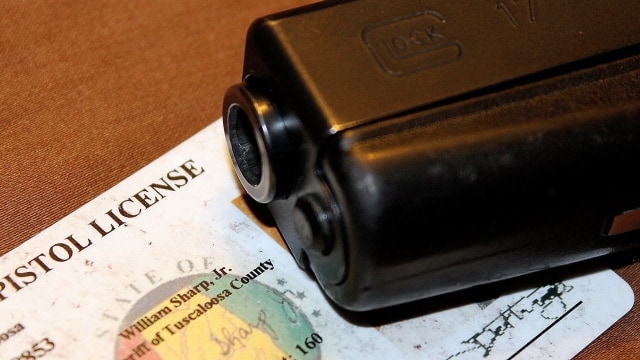 Each of the 67 county sheriffs in Alabama can charge what they want for a pistol license, but a new bill could allow those seeking one to shop around for the best deal. (Photo: AL.com)

A measure that would let Alabamians seek better deals on concealed carry permits from sheriffs other than their own passed with unanimous approval Tuesday.

Alabama Senate Majority Leader Sen. Jabo Waggoner, R-Birmingham, proposed the bill in March and, after the 7-0 approval of the Government Affairs Committee, won over the chamber as a whole in a 27-0 roll call on April 19.

Issued by county sheriffs, pistol permit fees vary throughout the Yellowhammer State, depending on the county and the length of time the permit is valid. For instance, a five-year permit issued in Jefferson County costs $37.50, while the same permit in Coosa County, just an hour away, costs $125 even though both are recognized throughout the state and in 25 others via reciprocity agreements.

Waggoner’s bill, SB304, would replace language in state law that requires those seeking a permit to apply only with their local sheriff, with a modification to grant them the ability to apply with any sheriff in the state. Further, it mandates that sheriffs shall-issue a permit within 30 days after a successfully completed National Instant Criminal Background Check.

While the powerful Alabama Sheriffs Association has opposed some gun reform measures, including one to allow guns in cars without a permit and some have bemoaned the loss of restrictive may-issue practices allowed in the past, they have not weighed in on SB304.

The National Rifle Association, who backs the measure, welcomed the news of its approval this week.

“This bill acknowledges the simple truth that law-abiding Alabamians should not be charged different amounts for the same permit,” said NRA Spokesperson Catherine Mortensen in a statement. “The NRA believes that concealed carry permit fees should be limited to the actual cost of processing the permit and complying with all statutory obligations. Anything above that is a discriminatory tax on law-abiding gun owners and a revenue generator for the county.”

SB304 now heads to the state House where Republicans hold a substantial 72-33 majority.