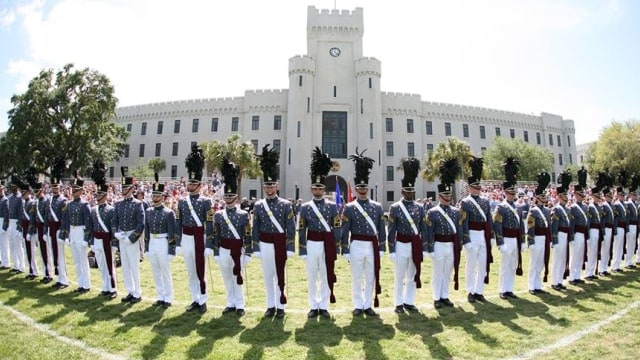 The Blue Book of the Military College of South Carolina has long prohibited personal firearms stored in a personal vehicles parked on campus. (Photo: The Citadel)

A month after cadets asked South Carolina Gov. Nikki Haley while on a visit to the campus for help, cadets with concealed weapons permits will be able to leave personal guns in their vehicles.

Haley was speaking in the military academy’s ninth-annual Principled Leadership Symposium in March when, after allowing questions from the assembled cadet corps, was asked by Cadet Austin Lee for her assistance with a petition signed by 1,100 students for the Citadel to allow the personal guns of CWP holders to remain in student’s cars on campus.

“My question for you is: Will you support our advocacy for this much-needed change?” asked Lee to the reported applause of those assembled.

The Governor replied that she had talked to school President Lt. Gen John Rosa about the issue and assured Lee and the cadets he had a “welcome ear.”

While South Carolina law grants allowances for guns secured in cars on public college and university campus property, the Citadel’s expansive 70-page Blue Book reads, “Regardless of possession of a Concealed Weapons Permit, at no time may personal firearms be stored in a personal vehicle parked on campus as defined as 171 Moultrie Street, Johns on Hagood Stadium and accompanying parking lots, The Citadel Beach House, the Lockwood Property, College/Riley Parks, and The Citadel Alumni Facility…”

Now the school’s Board of Visitors has voted to set the policy aside and will recognize state law.

“It has been a long hard road, but we are ecstatic about today’s victory,” said Lee, a graduating senior, as reported this week by the The Post and Courier. “We fought this policy because it was the right thing to do, not for personal gain. We hope our dedication to our constitutionally guaranteed freedoms will inspire others in similar positions to do the same.”

Haley’s office weighed in on the matter this Tuesday, saying, “The governor appreciates Lt. Gen. Rosa’s willingness to listen to cadets and is happy to see the university adopt a policy, consistent with state law, that protects the rights of those who hold CWP.”

With gun law and preemption decided, the school is currently embroiled in controversial debate over allowing a female Muslim student to wear a hijab for the first time.

The Citadel is a public, coeducational college established as the Military College of South Carolina in 1842.