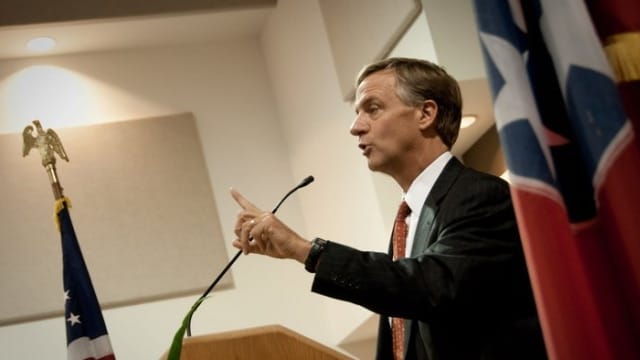 Governor Bill Haslam, with a history of signing pro-gun legislation, approved a measure that hopes to carve the Volunteer State out of international agreements that could violate individual gun rights. (Photo: tn.gov/governor)

Republican Gov. Bill Haslam signed a popular House bill on Tuesday prohibiting the enforcement of international laws in the state that could affect the Second Amendment.

Introduced in January by a House Democrat, the bill saw bipartisan support passing the chamber as a whole in a 88-2 vote last month before carrying the Senate 27-0 on April 7. Rep. Barbara Ward Cooper, D-Memphis, and Rep. Bill Beck, D-Nashville cast the only two votes in the assembly against the measure. Haslam signed it without comment on April 19.

“Article I, Section 26 of the Tennessee Constitution grants citizens the right to keep and bear arms,” said sponsor Rep. John Mark Windle, D-Livingston, before the House vote in March. “This bill simply prohibits any interference with that right by international treaty.”

The new law notes the landmark 2008 Heller Supreme Court case that recognized the right for individuals to keep and bear arms. As such, it moves to prohibit law enforcement officers in Tennessee from enforcing provisions of international law and treaties that limit gun rights as outlined by the Second Amendment and the state constitution.

However, Boldin cautions the new law may need to be backed up in court to have any teeth.

“HB2389 will likely require further action to be put into practical effect,” he noted. “A lawsuit could be necessary to determine a violation of the state Constitution, or the legislature might need to create some mechanism to determine whether a treaty or other international action was contrary to Tennessee law or the state constitution.”

Allen Youngman, executive director of the Defense Small Arms Advisory Council told Guns.com previously he didn’t think the treaty would be ratified because the U.S. is already in compliance in terms of carefully scrutinizing export license applications, a key goal.