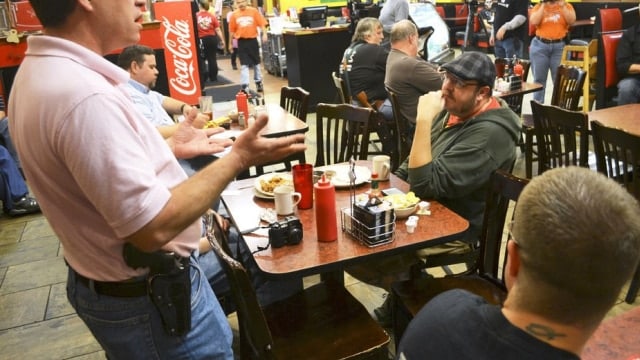 Open carry has been the law of the land in Oklahoma since 2012 as long as you had a permit, but that could soon change. (Photo: Zeke Campfield/The Oklahoman)

The Senate passed a House measure Wednesday that would allow Oklahomans to openly carry of handgun without having to first obtain a permit.

The bill to allow lawful gun owners over 21 to carry without a permit or training was introduced in February. Passing the House last month by a 73-15 vote, it carried the Senate this week 37-9 before moving into conference committee for further action as a last stop before a meeting with the governor.

For sponsors of the measure, it all comes down to the Second Amendment.

“If we give people some freedom, people tend to use that responsibly,” said Rep. Jeff Coody, R-Grandfield. “We have a government that wants to take our constitutional rights away from us. This is push back.”

Coody’s bill, HB 3098, would grant a law-abiding citizen the protection under Oklahoma law to open carry a handgun without obtaining a Self-Defense Act handgun license which has been required since 2012. These permits cost $100 for five years and mandate eight hours of training.

The legislation will not change concealed carry laws in the state and permits will still be issued for those who seek them.

The Oklahoma State Bureau of Investigation estimates allowing open carry without a permit will slash up to $7 million from their operating budget, causing a layoff of as many as 25 percent of their positions.

“It would have a devastating effect on OSBI. We would not have any more gun licensing,” contends bureau spokesperson Jessica Brown.

Democrats feel the bill is unneeded.

“I have never heard a constituent complain that they are not able to get a permit to carry their gun or that the current requirements are too burdensome,” said Sen. Emily Virgin, D-Norma. “I fear that this will lead to people carrying guns who are not trained whatsoever in gun safety.”

A coalition of gun control advocates, law enforcement lobby groups, universities and even the NBA’s Oklahoma City Thunder basketball team are uniting against the proposal and a House Resolution, HJR 1009, which would add an amendment to the state constitution protecting gun rights.

The opposition groups contend the proposed new laws could lead to a chain reaction that could see existing gun-free zones by private businesses, at public colleges and universities evaporate, possibly even threatening future professional and college sporting events in the state.

“Gloom and doom predictions of ‘wild west’ scenarios in states with strong gun rights have proven time and again to be nothing more than scare tactics,” said NRA Spokesperson Catherine Mortensen in a statement. “Since 1991, when the nation’s total violent crime rate hit an all-time high, 26 states have adopted Right-to-Carry laws, and the violent crime rate has declined by more than half, to a 43-year low, and the murder rate has declined to an all-time low.”

Should lawmakers work out their differences on the bill version currently in committee, it will go to Governor Mary Fallin for review.