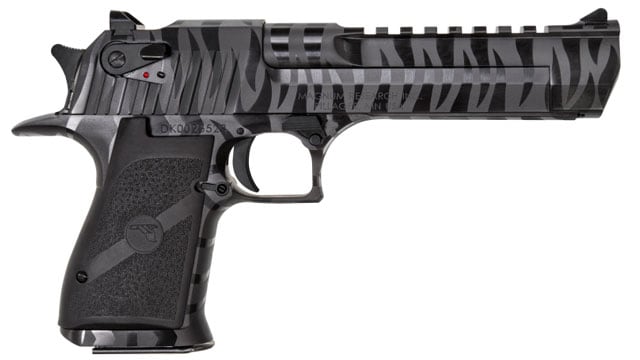 The company is seeking to satisfy the tastes of gun enthusiasts who want to make a fashion statement to go with their big-caliber handgun.

The dark tiger stripe model was introduced at SHOT Show 2016, but is just now available for sale. It’s the latest in the Desert Eagle animal print series. The first of the series, a cheetah pattern, was introduced in February 2015.  There’s also a snakeskin finish.

CNC machining is utilized in the manufacturing process, creating tight tolerances and consistency.

It may be a beast, but it has its amenities. Anatomically-shaped grips assist with handling for rapid firing.  A Weaver-style rail allows the user to add optics. The safety is ambidextrous.

Frank Harris, Vice President of Sales and Marketing for Magnum Research, said, “to address those fans who want something ‘flashier’, we have introduced our handguns in multiple colors, polished gold or chrome and even animal prints.”