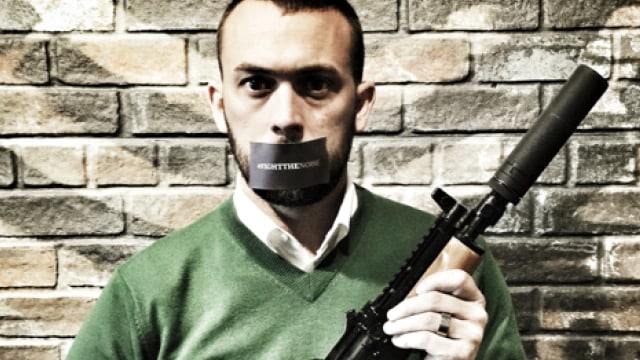 Suppressors are at the core of SilencerCo CEO Josh Waldron’s lifestyle. (SilencerCo)

Josh Waldron has striven to move the business of suppressors from an obscure industry to a household item in the past eight years and wants to bring them to all 50 states and free from prohibitive federal regulation.

Waldron co-founded Utah-based SilencerCo and has served as chief executive officer since its inception in 2008. Starting with their first product, the Sparrow .22 caliber suppressor, which the company sold 750 of in its first year, SilencerCo now counts a staff of nearly 300 employees and is shipping a staggering 10,000 suppressors of all kinds every month.

He insists it’s all about trying to reach a new gun owner generation that is more perceptive, more edgy, and is increasingly modern.

“We’re trying to make guns sexy again because they always really have been in this country,” Waldron told Guns.com. “It’s been part of the fabric of the culture here but we want to make sure that that continues and so we’re trying to revive that.”

Besides introducing innovative new product lines like the Salvo, Maxim and Summit series, SilencerCo is putting just as much time and attention into opening the doors to reach millions of Americans who have long been prohibited by what Waldron sees as archaic laws over a product that he maintains is simply misunderstood.

“We’ve had a really good success rate going in the states and educating the lawmakers,” he points out.

Since 2008, the company has paired with others in the industry as well as the American Suppressor Association and more traditional gun rights groups like the National Rifle Association, National Shooting Sports Foundation and Congressional Sportsman’s Foundation to form a team that can knock down walls.

In less than a decade, the number of states that allow hunting with suppressors has ballooned from 22 to 39 while 15 states have enacted “shall-sign” or “shall-certify” mandates preventing local law enforcement from refusing to process vital paperwork to allow transfers on National Firearm Act-regulated items — legislation that helps not only the suppressor industry but also makers of other NFA items like short barreled shotguns and rifles.

Most importantly, three states — Vermont, Iowa and Minnesota — have legalized suppressor ownership for civilians, bringing the total to 42.

Waldron said that number will continue to rise.

“States that we’ve never thought possible like Illinois is gaining a lot of momentum and there’s a very high probability that Illinois will be another state here as well as Massachusetts,” he said. “I’ve sat down with both of those governors in both of those states and they’ve promised to sign the bill if I can get it to their desks.”

Will all 50 states someday end prohibitions on suppressors, some of them dating back almost a century? Waldron thinks it is possible, though concedes it may be an uphill fight for the last handful. But with the sheer numbers of new suppressor owners out there moving the items from novelty status to the everyday, a tipping point could be near.

In the end, he thinks that by going out and backing common sense laws while being an advocate for suppressors as safety items and not the stuff of Hollywood hitmen and pulp fiction assassins, it is good for everyone.

“It’s going to really help all of our competitors as well but being the educators, being the voice, being the people that are doing the work, it lends a lot of goodwill in the market and when you do what you believe people tend to do be fans instead of customers and that’s really what we’ve tried to do from the beginning,” said Waldron.

Then there is the Holy Grail of the suppressor industry: removing NFA regulation all together. That’s where the Hearing Protection Act, currently in the U.S. House, comes in.

Introduced last October by U.S. Rep. Matt Salmon, R-Arizona, the bill to deregulate the devices currently has 59 co-sponsors. This gives the measure the backing of representatives from 33 states including one Democrat, Rep. Peter DeFazio, of Oregon.

Further, the HPA has been among the top 10 most-viewed bills on Congress.gov almost every week since it was introduced, showing that at a minimum, the interest is there.

Is the bill going to pass the 114th Congress, which is racing towards the end of its session in a contentious election year with a lame duck president ready to potentially veto? Maybe not, but it is paving the way for things to come.

In the meantime, the Bureau of Alcohol, Tobacco, Firearms, and Explosives’ proposed Rule 41F is set to drop in July.

Under its original framework, 41P sought to require that all NFA transfers undergo a certification by the Chief Law Enforcement Officer in their area — even for transfers to legal trusts. Current regulations require individuals, but not trusts or legal entities, to obtain CLEO certification before making or receiving an NFA item.

However, as outlined in the updated rule signed by U. S. Attorney Gen. Loretta Lynch earlier this year, those deemed “responsible persons” submitting an NFA trust will have to provide photos and fingerprint cards along with the application and while all, both trusts and individuals, will have to notify an “appropriate State or local official” of their application, the local CLEO will no longer sign off on the forms.

“A lot of people are worried about 41F but there’s really not a lot to worry about,” he said. “Yes, there’s going to be a little bit more red tape if you buy under a trust, but now it’s easier to buy as an individual so I think that we’re going to see a lot of people switch over to just start to buy under their individual name on a Form 4 instead of through a trust or they’ll still buy through a trust — for the ability to pass down from generation to generation — but they probably won’t add as many trustees as they have in the past just because it’s more paperwork.”

As far as putting a dent in production, Waldron doesn’t see it, because the demand is still there.

“So I think that this market is going to continue to grow at a rapid pace. It’s been the fastest growing segment of the shooting sports industry for several years to right now and I don’t think that that’s going to change anytime soon,” he said.