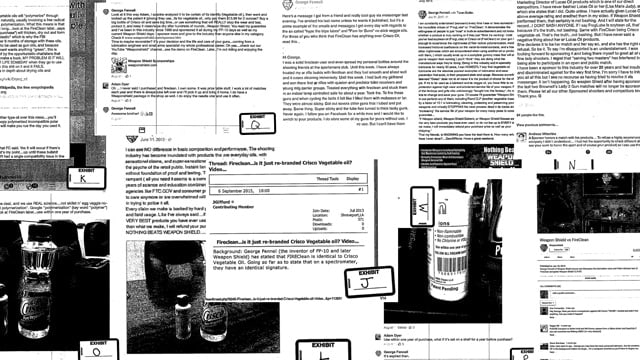 A collage of George Fennell’s comments collected as evidence for the lawsuit.

A federal judge agreed Friday to hear arguments to quash charges in a libel case against George Fennell, the owner of a gun lubricant company accused of starting the rumor that FireClean is Crisco cooking oil.

His counsel submitted the motion on April 21 because Fennell was never personally served a copy of the summons and complaint as required by federal law. Rather, the documents were brought to the location of his company, Pennsylvania-based Steel Shield Technologies, and given to his chief financial officer. The motion said neither were legally authorized to receive court papers on Fennell’s behalf. His attorney will appear for a hearing at a Virginia federal court on May 6.

Also, a response filed this week denied all allegations that he intended to defame his competitor. According to the response, he denied the characterization that he made the statements to damage FireClean or steal business. From FireClean, the response demanded “strict proof” that the gun lube is not Crisco and that his conflation of the two products actually damaged the company’s business.

The response also challenged the jurisdiction of the case, arguing it should have been filed in a federal court in Pennsylvania instead of Virginia.

Last summer, on social media, Fennell repeatedly described FireClean, or its chemical composition, to be identical to common cooking oil and he seemed to have settled on Crisco as a synonym.

The dispute started when Fennell published a video comparing FireClean to his product, Weapon Shield. “[FireClean] is about the equivalent of Wesson oil. Maybe some Pam anti-stick stuff that you get in the vegetable oil category for spraying on your frying pans,” he said in June, an opinion he shared as an expert interpreting details on the product’s material safety data sheet.

The following day, he posted an image on social media of FireClean next to a bottle of Crisco. “I can see no difference in basic composition and performance,” he warned and supported the statement by saying, “Every claim we make is backed by hard proof and evidence both in lab testing and field usage.”

According to court documents, a month later on social media, he called FireClean the “Pam for guns” and said that FireClean doesn’t have “anything over Crisco Oil.”

According to court documents, on Aug. 1, Fennell said he “spectra-analyzed” FireClean to verify his hypothesis was correct and that when he looked up the company’s patent, he found vegetable oil. “Buy a big bottle of Crisco oil and save big time,” he said. However, the results remain unpublished.

FireClean’s owners, David Sugg and Edward Sugg, named Fennell and Steel Shield Technologies as plaintiffs in the lawsuit for an unspecified sum in damages.

The brothers also sued in another lawsuit two bloggers who explored Fennell’s statements by submitting FireClean to infrared spectroscopy tests, which are used to identify chemicals, and comparing it to cooking oils such as Crisco. Although their tests were conducted separately, both of their published conclusions showed FireClean to have a similar construction to cooking oils.