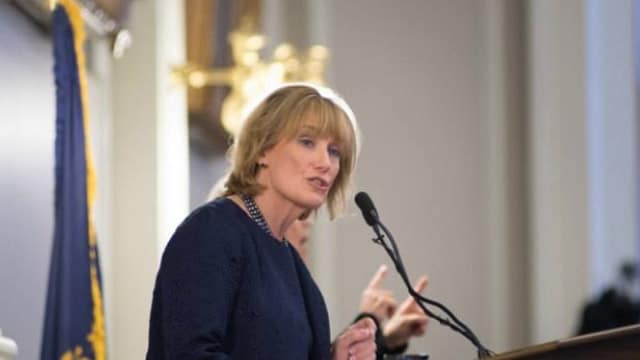 Gov. Maggie Hassan may have a chance to deliver another veto on a permitless concealed carry bill in the coming weeks. (Photo: Gov. Hassan’s Facebook)

For the second time in two years, lawmakers in New Hampshire are on the verge of sending a bill to make the Second Amendment your concealed carry permit to the governor.

Last fall, staunch anti-gun Democrat Gov. Maggie Hassan vetoed a measure placed on her desk to codify the right to carry without first being issued a permit. A new proposal this session passed the House with a 206-146 vote earlier this year and the Senate 14-10 this week.

“This is our opportunity to ensure the Second Amendment rights of our constituents are upheld,” said supporter Sen. Gary Daniels, R-Milford, on the Senate floor.

The legislation, HB 582, keeps the state’s current concealed carry permit system that has been in place since 1923. However, it makes clear that the fact those permits exist does not prohibit unlicensed transport or carry of a concealed pistol or revolver in a car or on one’s person if the carrier is an adult legally able to possess a firearm. Retaining the option of issuing permits would allow state residents to carry while traveling to other parts of the country that honor New Hampshire’s current licenses.

“I’m disappointed in legislators for not defeating this dangerous legislation,” said Deidre Reynolds with the New Hampshire chapter of Moms Demand Action in a statement. “Allowing potentially dangerous people to carry loaded, hidden weapons in public without a permit simply defies common sense. If this bill becomes law, local law enforcement agencies would completely lose the ability to deny permits to dangerous people.”

Gun rights groups to include the National Rifle Association argue that permitless open carry is already legal in the Granite State while neighboring Vermont has always allowed concealed carry without the mandate of a license and Maine adopted similar guidelines last year.

“In New Hampshire, existing state law recognizes the right of any citizen who can legally own and possess a firearm to carry it openly, either loaded or unloaded, anywhere in the state not prohibited by law,” reads a statement from the NRA.

“However, if a firearm becomes covered by a coat or if a woman prefers to carry a firearm for protection in her purse, he or she would need a concealed carry handgun license,” the statement continues. “The proposed legislation would extend permitless open carry to permitless concealed carry, allowing law-abiding gun owners to protect themselves and their loved ones in the manner that best suits their needs.”

The measure needs a final review by the Senate Finance committee and one more vote to send it to Gov. Maggie Hassan who is currently challenging incumbent Republican U.S. Senator Kelly Ayotte for a seat in Congress. The Governor’s office is again vowing to scuttle the gun reform.

“Governor Hassan does not believe we need to change New Hampshire’s current concealed carry permitting law — which Republican Mel Thomson called a ‘sensible handgun law’ and has worked well for nearly a century, safeguarding the Second Amendment rights of our citizens while helping to keep the Granite State one of the safest states in the nation,” said William Hinkle, Hassan’s communications director.

A veto could set the stage for a potential override such as the one seen already this year in West Virginia where state legislators overturned Democrat Gov. Earl Ray Tomblin’s attempt to stop similar legislation that, like New Hampshire’s, had been rejected last year.