Gun rights group calls on Chicago mayor to step down 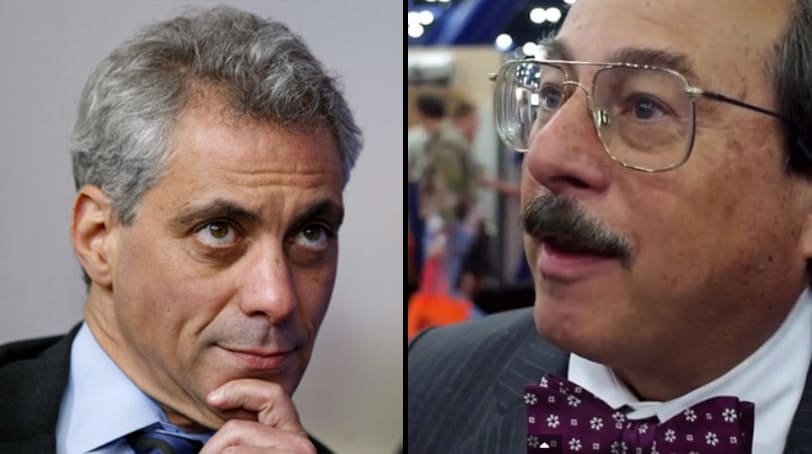 Alan Gottlieb (right), chairman of the Citizen’s Committee for the Right to Keep and Bear Arms, called on Chicago Mayor Rahm Emanuel to step down following news of the city suffering more than 1,000 shootings so far in 2016. (Photos: Reuters / Guns.com)

In an aggressive move, the Citizen’s Committee for the Right to Keep and Bear Arms said it also wanted Emanuel to “admit his incompetence” in the role he played to tighten firearm regulation — something the gun rights group claims has had a negative impact on public well-being.

“Rahm Emanuel’s administration has been a disaster for public safety,” said Committee Chairman Alan Gottlieb. “His incompetence and anti-gun ideology as a public official are responsible for his inability to deal with this situation.”

The Chicago Tribune revealed Wednesday a grim milestone for the Windy City — 1,000 — the number of shootings there reaching a level or frequency not seen since the 1990s.

As of Monday, the number of Chicago shootings reached 1,051, sending 2016 well on its way to reaching the 2,988  victims who suffered shooting incidents last year.

“As a city, we cannot rest until we fully address the systemic issues facing the Chicago Police Department, and the steps announced today build on our road to reform,” Emanuel said Thursday in a statement.

For Gottlieb and other gun rights advocates who watch Chicago and hold it up as an example of the need for good guys with guns, police reform isn’t enough.

“While the mayor has allowed his city to descend toward anarchy,” Gottlieb said. “His administration has worked aggressively to keep the public disarmed and vulnerable, making them all victims of Emanuel’s failed policies.”

Chicago hasn’t been complying with the spirit of the 2010 U.S. Supreme Court ruling in McDonald v. City of Chicago, Gottlieb said.

“His restrictive policies have prevented gun stores, where people could obtain the tools to defend themselves and their families. His administration has resisted shooting ranges where citizens could get training and practice,” Gottlieb said.

The 2010 McDonald decision was a landmark for gun rights and held the Second Amendment applied to individual states. The Supreme Court also found those rights were protected under the due process clause of the 14th Amendment. The Second Amendment Foundation, also founded by Gottlieb, brought the case before the highest court.

“Six years after McDonald, there are still no gun stores or ranges inside the city limits,” Gottlieb said. “There is no encouragement to fight back against the violent thugs and drug gangs who prey on the public and have turned the city into a slaughterhouse.”

Emanuel’s office did not respond to requests for comment, but many gun control proponents don’t agree with Gottlieb and others in his circle on the assertion that more guns in the hands of law-abiding citizens will reduce crime — and to the contrary point to evidence suggesting the weapons only work to increase the lethality of an otherwise nonlethal incident.