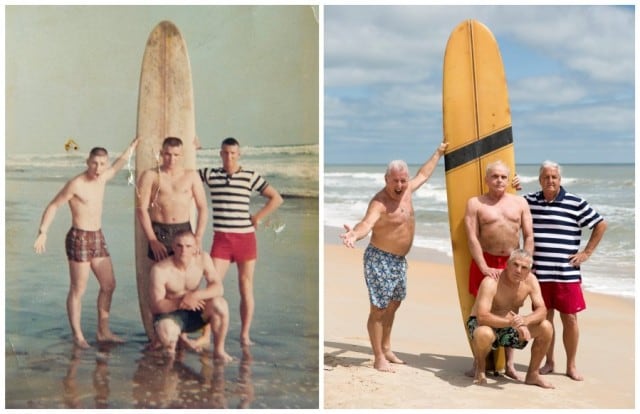 The first photo was taken in Oceanside, California before they shipped off for Vietnam and the new one, while taken in Florida a half-century later, is faithful to the original.

In May 1966, Dennis Puleo, Tom Hanks, Bob DeVenezia and Bob Falk were weapons platoon guys, with three being machine gunners and the fourth an anti-tank man, undergoing training at Marine Corps Base Camp Pendleton in sunny California. Before heading off to Vietnam– where two would become Purple Heart recipients– they posed for a snapshot at the beach with a surfboard borrowed from a local beach bum.

“It’s a really funny picture,” DeVenezia said, “but one with a lot of heart behind it.”

Then, after the horrors of Vietnam, the men drifted apart, until they had the idea recently to get back together for a reunion of sorts. As they all live in the Southeast now, Florida replaced the West Coast but the four vets, complete with another borrowed surfboard, were able to pull off a fairly close recreation last weekend, just a few days shy of the 50th anniversary of the vintage picture.