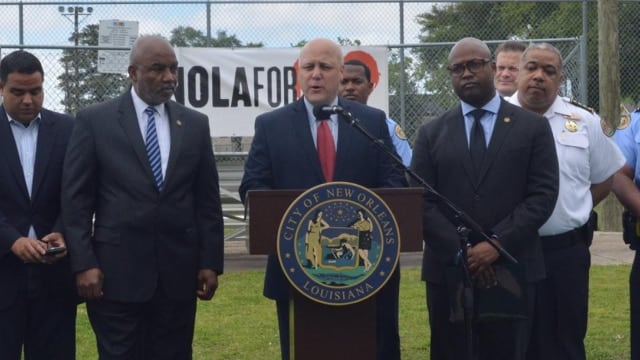 City officials are treading a fine line against state preemption law in a bid that some are calling political grandstanding. (Photo: Mitch Landrieu/Facebook)

Mayor Mitch Landrieu and city leaders announced a multi-faceted proposed Gun Safety Ordinance on Friday in an effort to combat crime by going after guns.

The proposal was unveiled alongside New Orleans City Council President Jason Rogers Williams, Councilmembers Jared C. Brossett and James Gray along with NOPD Superintendent Michael Harrison. Under its guidelines the Crescent City would see mandatory reporting of lost or stolen guns, deem city parks “gun free zones, establish city fines for carrying a gun without a serial number or being a convicted domestic abuser with a firearm and criminalize some who conceal carry.

“We have a moral obligation to do everything in our power to fight back and halt the stream of guns getting in the wrong hands and increasing the penalties when they are used negligently,” said Landrieu in a statement before calling the proposed new laws “common sense solutions to address illegal guns and strike at the heart of this wanton violence that unfortunately occurs far too often.”

Landrieu, a Democrat and member of former New York Mayor Michael Bloomberg’s Mayors Against Illegal Guns, has repeatedly held up gun control, along with social fixes such as preventing teen pregnancy, as a way to abate New Orleans’ persistent ranking as one of the deadliest cities in the world.

The proposed ordinance would mandate that guns lost or stolen should be reported to the NOPD within 48 hours. Failure to do so could lead to a $250 fine. City officials feel the law, which would be the first of its kind in Louisiana, would deter gun trafficking.

Next, the measure would make all of the 103 New Orleans Recreation Development Commission parks and facilities as well as areas where NORDC-sponsored events are taking place officially gun free zones under threat of a $500 fine or six months in jail.

Some of the city’s most notorious shootings have occurred in city parks to include the Bunny Friendly Park incident on Desire Street that left 17 injured – including 10 minors – last November. Landrieu has called the shooting an act of “domestic terrorism” though many of those indicted, all between the ages of 17-29, are believed to have gang affiliations.

New Orleans also plans to mirror state and federal laws with two of their own – one mandating serial numbers on firearms and the other prohibiting firearm possession by those convicted of domestic violence with fines of $500 for each. Importantly, the city’s proposed ordinance would recognize same-sex relationships under the definition of domestic partners for the purpose of the law.

Finally, the proposal would adopt a city ordinance against “negligent carrying of a concealed firearm,” even with a permit. State law already has guidelines for those who are carrying an otherwise legal concealed weapon if a law enforcement officer suspects they are under the influence of either alcohol or drugs, even allowing the officer to take temporary possession of the handgun until a test can be performed.

Some of the city’s proposals may conflict with Louisiana’s preemption laws which allow parishes and municipalities to adopt local firearms controls as long as they are comparable but not stronger than the state’s own laws on the subject.

Gun rights advocates see the new and largely toothless push from Landrieu and the councilmembers as grandstanding.

“This appears to be a political stunt. It has very little impact on anything,” said Amy Hunter, a spokeswoman for the National Rifle Association.

As noted by the Beauregard Daily News, so far this year there have been 35 homicides and 67 nonfatal shootings in New Orleans. One of those deaths, that of former New Orleans Saints defensive end Will Smith after an apparent road range altercation, brought condemnation from coach Sean Payton earlier this month.