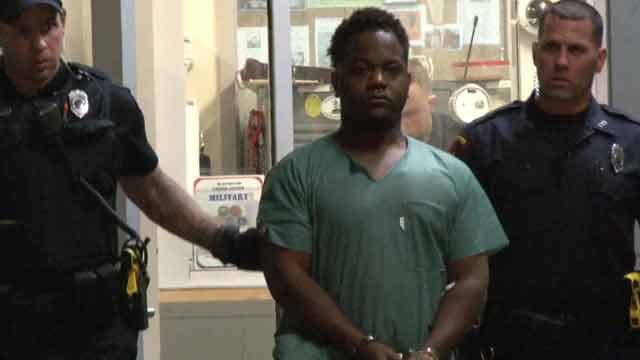 Kyle Johnson was facing 10 felony charges, including murder, when he was found dead inside his jail cell from an apparent suicide. (Photo: WICU 12)

A violent crime spree spanning through two states came to an end last week after the suspect was shot twice by a man who witnessed his neighbor screaming for help.

About a week prior to the abduction, Shakir was found lying in the middle of the street after several calls were placed to the police about a woman screaming. When officers arrived, they found Shakir had been severely beaten by Johnson, who had an active restraining order against him, but had already fled by the time officers arrived.

Shakir went to her mother’s home both to recover from the assault and because she felt it was a safe place for her to stay.

“She came here because she was afraid for her life,” Shakir’s cousin, Kim Barnett, told local media.

But last week while Shakir was at her mother’s home alone, Johnson abducted her, placed her in the trunk of his car, then set the mother’s house on fire before heading out of the state.

Johnson made his way to Erie, Pennsylvania, where authorities say the day after the abduction he chose a house at random and broke in using a crow bar. Once inside the home, Johnson found the female homeowner, who was alone at the time. Johnson used the crow bar to beat the woman, stabbed her with a box cutter, then placed her in the attic of the home.

Johnson then retrieved Shakir from the trunk of his car and carried her down to the basement of the home, where he proceeded to assault her again.

Soon thereafter, the homeowner’s husband returned home and immediately knew something was awry. According to reports from local media, the man saw signs of a struggle, as well as large amounts of blood as he entered the house. Additionally, calls to his wife went unanswered. Authorities say at that point, the homeowner feared the worst and when he came face to face with Johnson, he believed the man had killed his wife.

The two men became involved in a scuffle, with Johnson striking the man with the crowbar. The fight quickly spilled outside into the back yard, and that’s when the homeowner remembered that as he came up to the house, he saw his neighbor outside. Hoping that his neighbor was still nearby, the homeowner began screaming, yelling that Johnson killed his wife.

Johnson fled from the scene, but was caught a short time later.

Meanwhile, the homeowner found his wife, who was unconscious, and the officers found Shakir in the basement. The homeowner, who was later identified as Gary Miller, his wife, Kum Miller, and Shakir were all transported to the hospital for medical treatment. Gary was treated and released. Kum, who suffered severe blunt force trauma to her head and body, fought for several days before she succumbed to her injuries and died Saturday.

At that point, Johnson, who was already facing numerous felony charges on top of previous warrants, was slapped with murder charges. He was being held on a $500,000 bond and facing at least 10 charges. But the day after he was charged with murder, found dead in his jail cell from an apparent suicide.

Shakir, who is now in stable condition, remains in the hospital and is expected to survive. Her family is working to get her transferred to Cleveland hospital.