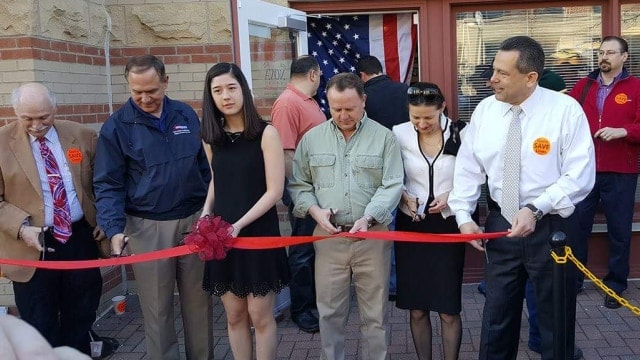 Nova Armory opened its doors last month but has since filed a $2 million lawsuit arguing local lawmakers are part of a conspiracy to run them out of town. (Photo: Virginia Citizens Defense League)

A Northern Virginia gun shop billed as the closest one to Washington D.C. is hitting back against its detractors — including state lawmakers — in court.

Arlington-based Nova Armory held its grand opening in a strip mall on North Pershing Drive last month, doing what others have failed to do in recent months by becoming the only licensed gun dealer with a storefront in the city.

However, they got more than just a cold shoulder from locals including six state lawmakers who penned a letter to Nova’s landlord on official letterhead urging her to cancel the lease on the store three weeks before it was set to open. In the letter, the group cited concerns that the store could be a “magnet for robbery” and that it could help create a “black market” in the area to sell firearms for cash or drugs.

One of those behind the letter, local Democrat Delegate Mark Levine, took to social media to blast the store.

“Are you ready to pay for all the funerals of all the people that your guns murder? And provide reimbursement for all wrongful deaths you cause? If not, then please, we beg you, leave Arlington,” Levine posted before advocating for a boycott of the entire strip mall and protests of the store.

Actions such as this prompted Broadstone Security, owner of Nova Armory, to name 64 individuals in a conspiracy including Levine and the other lawmakers, in a civil suit filed April 18 in Richmond City Circuit Court, contending the defendants communicated among themselves to cripple the business.

“The Defendants used social media to communicate and to post messages to each other and to the public of a defamatory nature intended to smear Plaintiff and destroy his business,” reads the 16-page complaint. Storeowners detail in court documents they have had harassing calls, emails, and letters including death threats made against the 16-year old daughter of Nova’s business manager after their personal phone numbers and addresses were made public.

The store is seeking more than $2 million in damages, expenses and lost revenue as broken down below: 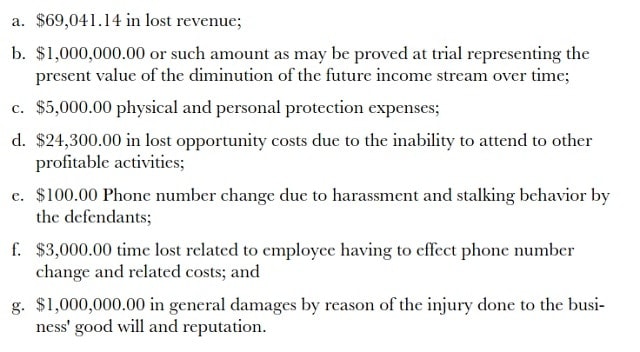 Rather than being protestors, as characterized by the defendants, Nova holds the 64 named were “disruptors” who resorted to tactics that included, “stalking the store with signs, parking cars covered with documents referring to horrible deaths, attempting to coerce and intimidate tenants of the same facility, etc.”

Further, they contend the lawmakers abused their official authority in trying to interfere with a commercial relationship between the store and their property owner.

“That’s considered malfeasance in office which is a common law crime,” said Nova attorney Daniel L. Hawes. “This has absolutely nothing to do with their legislative abilities, but they sent it on official Commonwealth of Virginia letterhead underneath the seal.”

Others have drawn similarities between the very public efforts to abort a store in Arlington’s Cherrydale neighborhood last year with the current campaign underway against Nova. The Cherrydale store moved locations in nearby McLean where it has been the target of continuing protests.

Nova supporters have an online petition that has gained over 2,000 signatures, protesting the “the intolerant bullying by those members of the community who, for the second time, intend to interfere with lawful commerce and impede the exercise of Constitutional Rights of others.”

As for Levine, he disagrees and feels the suit had no merit.

“It’s frivolous! I think I have an absolute First Amendment right to comment any way I want to and to represent my constituents in the way that they want to be represented,” Levine said.

While the suit doesn’t currently have its day in court assigned, the legislator has returned to social media to fight it out in the court of public opinion.

“The store complains that we 64 have criticized their business and singles me out in particular, because I have urged people not to shop there,” Levine posted Monday to Facebook. “I will not be intimidated by this flagrant attack on your and my First Amendment rights.”