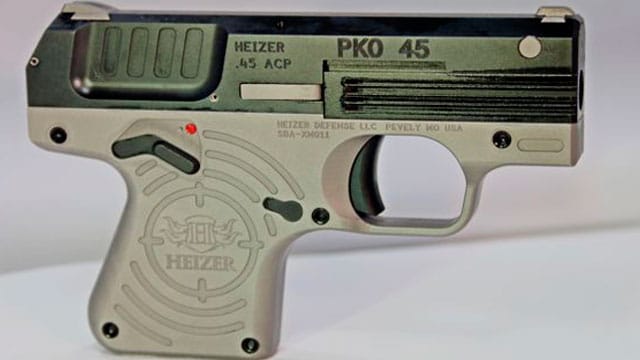 The PKO-45 is a new pocket pistol. (Photo: Heizer Defense)

Heizer Defense has promised a roll-out of the PKO-45, its new subcompact, at the U.S. Concealed Carry Association Expo in Atlanta, which begins Friday.

The gun holds 5+1 rounds with its flush magazine, and two more with the extended mag. It’s made for concealment, with a curvy design to avoid snagging on clothes. At 0.8 inches wide, it’s very slim.

Apparently foreseeing recoil-related challenges, Heizer Defense built some mitigating features into the gun. It’s made entirely of U.S. aerospace-grade stainless steel, and is heavy — about 25 ounces. Construction includes a fixed barrel under the guide rod, lowering bore axis in comparison to most semi-auto handguns.

The gun has two safety devices. A passive grip safety is on the front strap, and there’s an ambi thumb-operated lever. Operation is single action with an internal hammer.

The rollout will be followed by a trip back to the shop, however. Heizer Defense will offer testing of the PKO-45 next week at the USCCA Expo live fire range, but Consumers will have to wait until September to see the PKO-45 on distributors’ shelves.

When Heizer did its initial announcement of the PKO at SHOT Show 2016, a 9mm version was also reportedly in the works. No word on that yet.