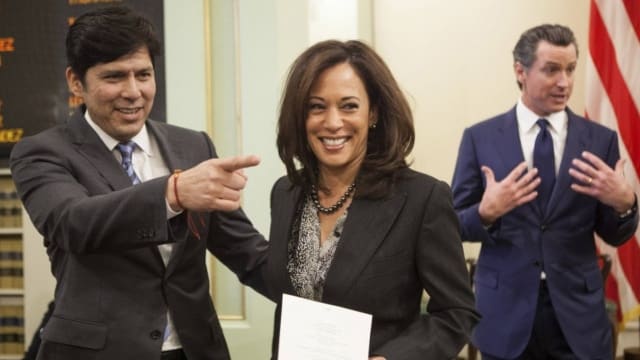 Lt. Gov. Gavin Newsom is backing a sweeping ballot measure to regulate guns, while Senate President Pro Tem Kevin de León is pushing his own list of bills through the Legislature.

Newsom, who is currently running to replace Gov. Jerry Brown, would place a five-point list of gun control measures in front of voters in the coming general election. De Leon, known nationwide for his failed “ghost gun” legislation, is helping to push a half-dozen or more proposals through the Senate that would accomplish many of the same initiatives that the would-be governor is backing.

However, De Leon made it clear to the state’s number two Democrat last week that there may not be room for competitors in the California gun control game.

Arguing that there is a good chance his legislative package will make it through to Gov. Brown’s desk, and citing that the legislative process is the preferred method over the ballot box to enact statewide policy, De Leon fired off a two-page letter to Newsom on April 21 asking him to pump the breaks on the referendum train.

“I fully understand the utility and strategy of public and private posturing,” wrote De Leon. “The downside is you will provide aid to gun-control opponents by giving cover to reluctant legislators who would rather side-step this important issue in lieu of a ballot initiative. This is why I sincerely hope you will be willing to work with the Legislature in advancing smart and sensible gun control measures.”

What De Leon did not take into account in his letter to Newsom is the fact that several of the measures currently in the Senate, including his own rebooted ghost gun bill, were previously vetoed by Brown in prior sessions and the outgoing governor has made no indication that his thoughts have changed in recent months.

Newsom, for his part, replied to the Senator’s letter, thanking him for his offer of working with state lawmakers but instead of accepting, counter-offered that De Leon should help with the ballot referendum as the best bet for enacting more restrictive gun laws.

“Simply put, the initiative is needed because it is more comprehensive, more powerful, and more permanent than anything the Legislature is considering and can legally accomplish,” wrote Newsom.

“Finally, winning at the ballot box will send a message to the NRA and empower voters and elected officials across the country to take bold action to reduce gun violence,” said the Lt. Governor.

Second Amendment advocates are not impressed with either side in the argument.

“This infighting just goes to show that their efforts are not about protecting people from gun violence,” Craig J. DeLuz, director of communications with the Firearms Policy Coalition, told Guns. com. “It’s about getting in the news and taking credit for banning guns.”