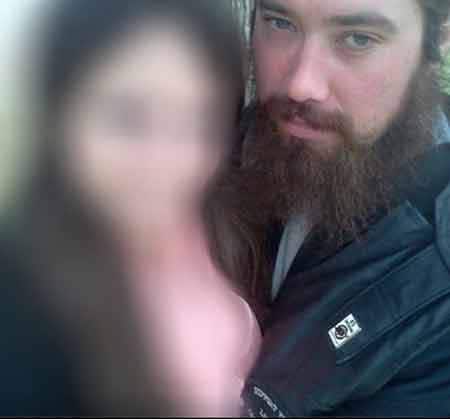 Kylie Vincent, whose face is blurred, and Eric Harrington.

A young woman who fatally shot her boyfriend during an altercation inside their Belding, Michigan, home last year acted in self-defense and will not face charges, the county prosecutor announced Friday.

Kylie Vincent, 21, placed a frantic call to 911 just before 5 a.m. on Oct. 21. Vincent told the dispatcher she just shot her boyfriend after he assaulted her and threatened to kill her. When officers arrived on the scene, they found 34-year-old Eric Harrington lying face down in a pool of blood on the floor just outside of the bathroom. He was pronounced dead at the scene. Officers also recovered a handgun with an empty magazine from inside the bathroom, precisely where Vincent told them it was located.

An investigation revealed the altercation between the couple started the night before. During a four-hour-long interview with authorities, Vincent explained that she and Harrington were arguing before she left for work that afternoon, and when she later came home after work, the argument only continued. Vincent fell asleep with the couple’s 1-year-old child, but Harrington later woke her to continue the argument in which he accused her of cheating.

During the course of the argument, Harrington placed the baby in the car and told Vincent it was the last time she would see the child. But eventually Harrington brought the baby back inside and Vincent and the child once again went to sleep.

Some time later, in the early morning hours, Vincent woke up to get a drink and discovered Harrington was still awake and had apparently been up all night. The argument continued and as things escalated, Vincent decided it was time to leave, so she went to the bathroom to gather some of her things.

At that point, Harrington followed Vincent into the bathroom and began hitting her and slamming her head into the wall with such force that it caused damage to the drywall. Vincent told authorities she managed to get away from Harrington after he said he was going to kill her, and she went to the bedroom to retrieve a handgun.

Vincent said she trained the gun on Harrington and told him to stay away as she came out of the bedroom and backed into the bathroom. She said she tried to close the door, but Harrington, who she described as “very angry, puffing out his chest,” would not let her. But when Harrington charged at her, Vincent shot him. She said she continued to pull the trigger until the magazine was empty, then found her phone and called 911.

Vincent told authorities in an interview she feared if Harrington got the gun from her, he would have killed her.

An autopsy revealed Harrington had been shot eight times. It also turned up “sufficiently measurable amounts” of methamphetamine, amphetamine and THC.

The couple had a history of violence, including an August incident which left Vincent at the hospital getting staples in her head. Additionally, Harrington had a lengthy criminal record, which included domestic violence against other women and a history of drug abuse. During the investigation, authorities interviewed 27 people, the majority of whom testified to Harrington’s abusive ways.

Ionia County Prosecutor Kyle Butler said although Harrington’s death was ruled a homicide, it was determined to be justified and therefore not the same as murder.

“Ms. Vincent was, by all accounts, fully cooperative and forthcoming throughout the investigation,” Butler said. “I believe Ms. Vincent acted in lawful self-defense.”