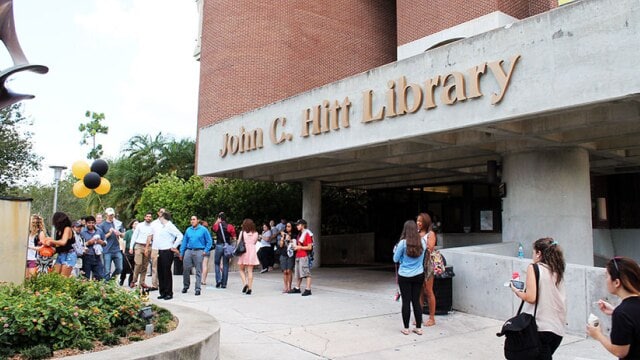 The John C. Hitt Library at the University of Central Florida this week was the site of an alleged active shooter that did not materialize, and an officer involved shooting that did. (Photo: library.ucf.edu)

A call that began with a “Middle Eastern gunman/woman” ended with no shooter found but a campus cop’s weapon one round lighter.

Calls to the University of Central Florida’s police department of a possibly armed individual in the school’s library Tuesday afternoon led the agency to post “Possible Middle Eastern gunman/woman in UCF main campus library. Avoid the area,” to social media in an effort to warn faculty and students. The tweet was later removed and the 911 calls, as reported by a local radio station were hearsay.

This, however did not stop the response from UCFPD who aggressively cleared the 226,000-square-foot library and surrounding area floor by floor.

Then, just after the all clear came, a shot rang out. The party responsible for the gunplay? A UCF officer putting his weapon back in the rack of his cruiser.

While no one was injured, reports stated that “hundreds” of students were standing outside the library when the duty weapon went off.

“It was literally feet in front of me, so it was really scary,” UCF student Kayla Stevens said. “You kind of just saw the guy holding the gun, like it kicked back, and everybody that was standing there ran the opposite direction.”

“If anybody thinks my personnel are not trained, they are sadly mistaken. We spend a great deal of time, money and effort, and we will continue to train to protect our community. That’s our job. At the end of the day, our response wasn’t perfect. We’ll make it perfect,” said Beary.

Last year a gun rights group filed formal complaints with the Florida Ethics Commission over questions of whether nearly a dozen public college and university police chiefs testified against a campus carry bill on the public’s dime.

Terence Calloway, Florida A&M University Chief of Police at the time told lawmakers, “The only people on campus who should be armed are trained law enforcement officials,” while advocating against allowing those with valid concealed carry permits on school grounds.

The UCF incident is under investigation.