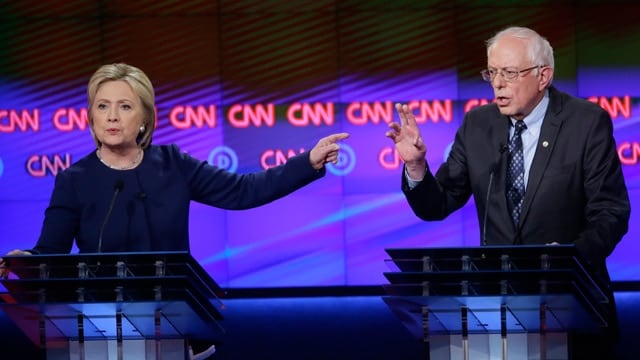 Hillary Clinton, left, and Bernie Sanders square off over the Protection of Lawful Commerce in Arms Act during March’s primary debate. (Photo: CNN)

More Americans from all over the political spectrum support the Protection of Lawful Commerce in Arms Act, according to survey results released Monday by the trade association for the gun industry.

Seventy-two percent of those polled said they favored the law that “prohibits lawsuits against firearm manufacturers and retailers when their legal, non-defective products that were lawfully sold after a background check are later used illegally in criminal activities,” according to the results.

From April 12 to 16, Harper Polling surveyed 1,000 registered voters from across the country on behalf of the National Shooting Sports Foundation, which lobbies for the gun and ammo industry.

During the survey, respondents were first asked general questions about their understanding of PLCAA; then they were asked to rate a series of statements about the law and ideas behind it; and lastly they were asked again if they favored or opposed the law.

When first asked their feelings toward the law described as “crime victims cannot sue firearm manufacturers and retailers when firearms they made or lawfully sold after a background check are later used illegally in criminal activities,” 65 percent said they supported it and 28 percent opposed it.

But after the series of questions regarding the law, those favoring it increased by 7 percentage points and those who opposed it decreased by 5.

Of the respondents, 31 percent identified as Republican, 34 percent as Democrat, and 34 percent as Independent, other or were unsure of their political affiliation.

The survey follows presidential candidate and former Secretary of State Hillary Clinton, who has been the political target for pro-gun groups during this presidential campaign season, criticizing the law in stump speeches throughout her 2016 bid. She has also been squaring off against her opponent, Vermont Sen. Bernie Sanders, over PLCAA. Sanders has been a supporter of the law despite criticism from his rival and pro-gun control groups.

During a campaign event in Iowa in October, Clinton said the gun industry is “wholly protected from any kind of liability” because of the law, a statement that was rated “false” by Politifact.

The law, which passed in 2005, provides a unique federal legal shield that most manufacturers of consumer goods do not have, but it does not guarantee blanket immunity for licensed gun makers and sellers. According to the a 2012 report by the Congressional Research Service, there are six exceptions:

PLCAA has been the subject of controversy for the past year. Last April, a federal judge cited the law when he dismissed a case by the parents of a victim killed during the 2012 movie theater shooting in Aurora, Colorado. The parents argued the online retailers that sold ammo and gear to the shooter did not do enough to vet the gunman before he made his purchases. The judge also ordered the parents to pay more than $200,000 in legal fees for the defendants.

However, the law is being challenged again in state court, where it has less clout and plaintiffs have had some success. Families of victims killed in the 2012 Sandy Hook school shooting are attacking the way a gun maker marketed its AR-15 rifles, one of which was used to kill 20 first-graders and six educators. The families are arguing that the company advertised the military-style rifle as an effective and efficient killing machine. The case is scheduled for trial in 2018.

Legislatively, PLCAA has a solid footing. Amid the heated rhetoric there’s been minimal effort by lawmakers to repeal it. In January, a bill was introduced in the U.S. Senate to repeal the law, but it has gained the support of only 12 other co-sponsors.