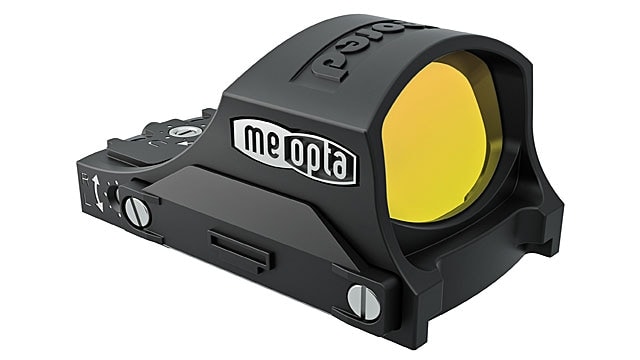 Meopta, of the Czech Republic, announced this week the release of the MeoRed, an updated version of its red dot sight.

The MeoRed has a lower profile than Meopta’s MeoSight III, and has several other improvements compared to the MeoSight model.  This new sight is built with on-the-move utility in mind.

Versatility is inherent in the little optic, which weighs 1.05 ounces.  It can be mounted on handguns with cutout slides, ARs, or shotguns using the integral MIL-STD 1913 mount or the interface plate for a Docter mount.

The many mounting options make the sight useful for three-gun, tactical use, target shooting, and close-range game.  It’s highly adjustable, with 180 MOA windage and 120 MOA elevation variables.  The 3 MOA red dot is easily adjusted in intensity for various light conditions and distances.  Controls are simple, with a single pushbutton on the left side serving as the on/off switch as well as the red dot adjustment.

Should co-witnessing with iron sights be desired or necessary, the low profile of the MeoRed accommodates that. It’s a mere 1.02 inches tall. The MeoRed is 1.85 inches long and 1.07 inches wide, making it unobtrusive and portable. The lenses are coated with a proprietary substance that Meopta says is hydrophobic, chemical-resistant, and prevents scratches. Guarding the glass is an aircraft-grade aluminum alloy hull which is shock-resistant and waterproof.  The finish is matte black.

A CR 2032 battery powers the MeoRed, and provides a run time of 300 hours. There’s a three-hour auto-shutoff in case the user forgets.  The battery can be accessed from the right side without removing the optic from the gun. Two screws hold the battery cover in place to ensure dependable operation during severe recoil.

Meopta covers the MeoRed, MSRP $517.49, with its lifetime, transferable North American Warranty.  Although manufacturing is in the Czech Republic, Meopta is US-family owned and has offices in the U.S. and other countries.